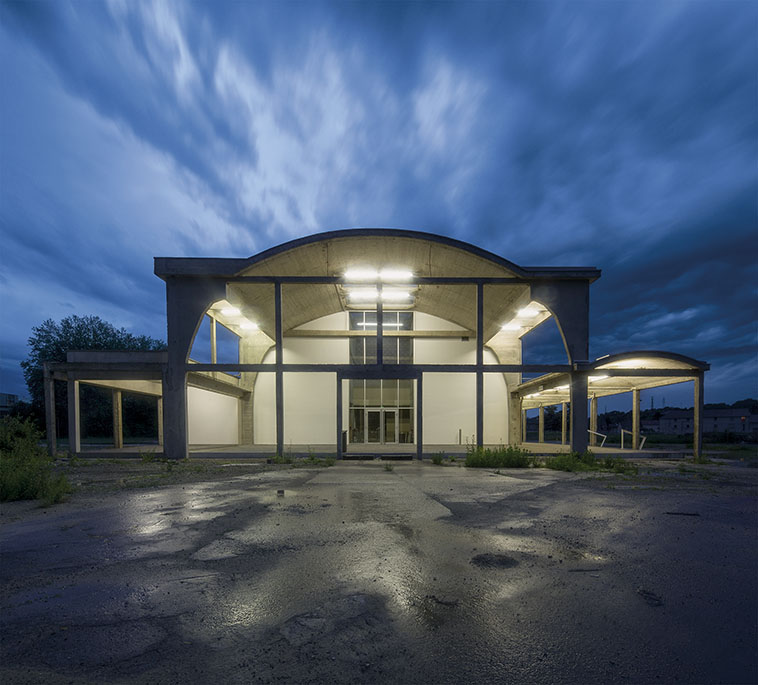 A Cultural Hub inside the Perret Hall

Built in 1949, the Perret Hall in the French commune of Montataire is part of the general inventory of the cultural heritage of the Hautes de France region and has recently been the subject of a project of renovation, expansion and transformation into a cultural hub.

The architectural intervention adapts to the characteristic section of the existing central nave type building, with wide openings and lateral areas. What is surprising in the architectural approach of reconsidering this reinforced concrete industrial building, supported by frames and covered with lenticular roof girders, is the overall concept. Thus, the proposed project defines spaces by releasing  the building from its matter, only adding the absolute minimum.

The new cultural hub includes a music school, a dance school, a broadcasting room and a recording studio. The three facilities take advantage of the height of the central nave to fit into the heart of  the structure, running linearly, from one end of the construction  to the other.

“The Perret brothers’ hall is enlarged through the clearing of the original frames. Moving in space, walking indoors, waiting and practicing music are all activities that come together in this slim concrete landscape, a place bathed in natural light” – Atelier d’Architecture Pierre Hebbelinck) 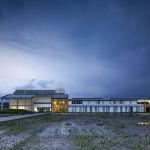 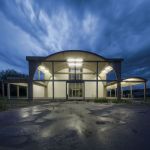 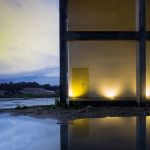 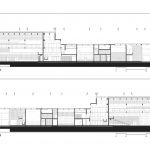 In a 21st century iteration, the architecture office nominated last year for the Mies van der Rohe prize, architecturally reimagines the movement of the construction workers, proposing a true architectural walk inside the concrete frames of the existing structure. The spaces between the concrete frames are totally liberated, becoming places of meeting and artistic creation that extend the urban space inside the building. The large rooms are placed at the heart of the hall, in order to benefit from the double height, to optimize the acoustics and to take advantage of the zenith lighting.

“The access to the first floor is an amazing architectural walk inside the generous volume of the 1949 hall” – Atelier d’architecture Pierre Hebbelinck.

The interior finishes emphasize the Perret identity – concrete. All floors have polished exposed screeds in shades of warm grey, typical of the so-called liquid stone, while the surfaces of the cast-in-place slabs are uncovered, in order to express the formwork. The vertical walls are made of autoclaved aerated concrete blocks. When installed on an axis of the existing building, the masonry expresses the horizontal beams of the structure. An element of tectonics surprises us – the texture of the parietals is given by a truth of composition, thus the drawing of the AAC blocks is expressed both by the physical contour and by a fine variation of color, resulting from the absorption of water from the mortar. The wall simply tells of its construction. 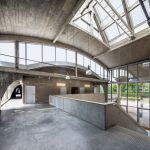 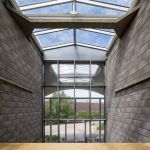 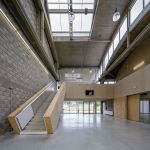 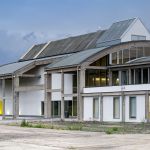 In the entrance lobby area, the warm grey environment is complemented by the heat of the laminated wood panels that cover the full balustrade of the main staircase and the horizontal course of the main corridor – a true split of the generous access and circulation space. Natural light inundates the reconfigured spaces of the cultural hub, inviting the viewer to a new architectural walk inside the Perret Hall.