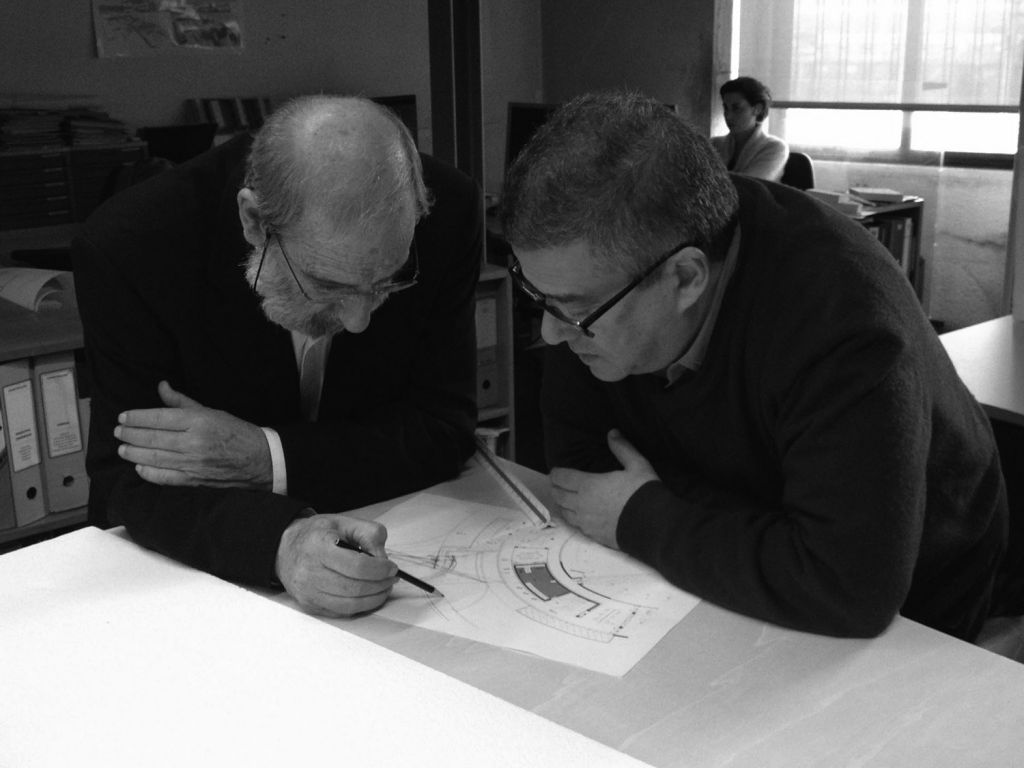 Recognized and awarded several prizes for the use of wood as the main material in numerous innovative projects, Carlos Castanheira is one of the close friends and collaborators of Álvaro Siza, as well as the curator of many exhibitions dedicated to the renowned Portuguese architect. Their professional relationship became more intense when Siza began to design buildings in Asia, with Carlos Castanheira being in charge of the coordination and supervision of the construction works (the latest completed project – the China Design Museum of Bauhaus Collection – can be seen here).

The Building on the Water, the first project that you completed in China, together with Álvaro Siza, is a very poetic space designed for an industrial context. How did this challenge unfold?

This project was conceived for a client in Taiwan and represents the administrative headquarters of a new and very large chemical plant. A local institute designed the masterplan for the whole complex and included an expansive lake that functions, in fact, as an emergency reservoir. Then, over the water surface, they placed a square that would host the central offices of the plant. This is where we intervened: keeping the masterplan in mind and following several work sessions with the client, we reached the conclusion that a curved building would be the best option. We prepared all the necessary plans, as well as a detailed model, the client approved the project soon enough, and there followed a lot of work in order to coordinate all of the distinct requirements of the place. To us, it was in many ways a special project and the first time when the building did not have ground underneath it, which made the construction process a lot more complicated. There were many technical challenges and, at one point, we had to appeal to the teams of engineers with whom we usually work in Europe. It was a special experience and there were a lot of fun moments, as well as many headaches. 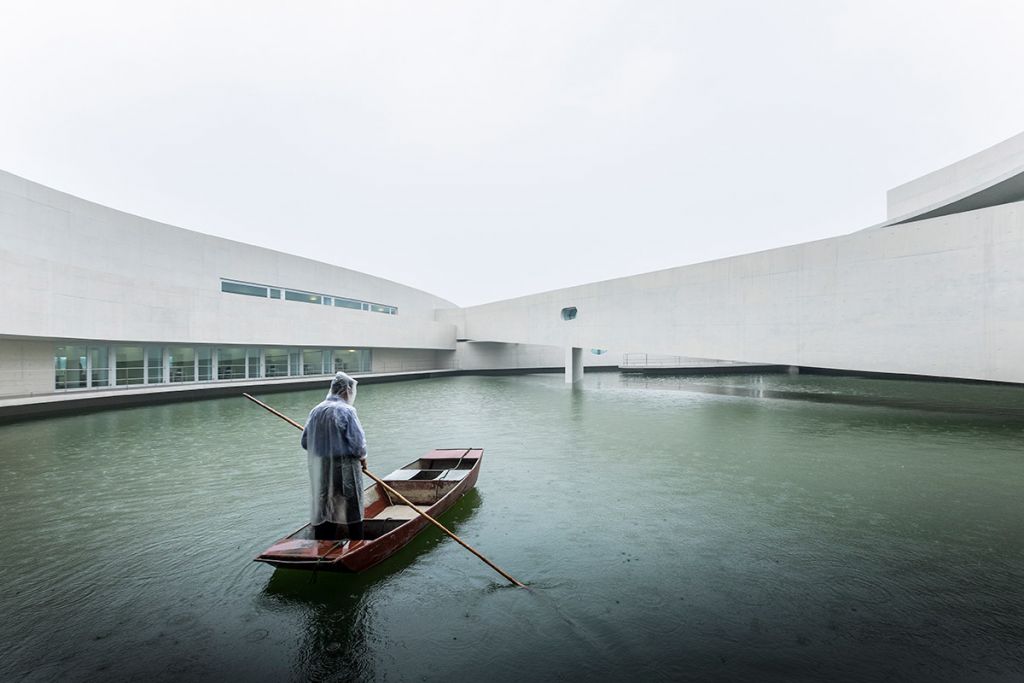 The Building on the Water; Photo: Fernando Guerra

Besides China, you also have the experience of having worked as an architect in Taiwan and South Korea. What do you think are the main differences between building in this part of Asia and building in Europe?

The differences are as big as the distance between the two. But making architecture is a universal act that has to be adapted to every context. Consider vacations or trips – if you leave your country expecting to find the same things from home, it would be best not to go in the first place and stay in your comfort area. However, this is not very interesting.

How did you manage to administer the distance, the sites, the works from such a distance?

The distances are very large indeed, as are the time differences. We saw the projects as challenges, new experiences, with a scale and complexity hard to find in Europe in this day and age. As for all other projects outside the country, we worked with a local team of Chinese architects and engineers called LDI (Local Design Institut) that completed all the activity from our office in Porto. At first, Álvaro Siza traveled with me twice a year in order to meet the client and oversee the construction site, but now he is trying to avoid intercontinental flights.

There are many photographs where you discuss and debate with Álvaro Siza with the models and plans by your sides. Can you tell us more about how this process unfolds?

We always begin the design process with a model of the site. Then, we add plans of the site, detailed photographs of the area, direct impressions from my travels and all the requirements of the program, and, based on all these, we draw up a first proposal. Next, we work in small steps, sometimes returning to the proposals, reanalyzing and making changes if we see that it’s not working very well. It’s a dynamic, continuous process, and we like this openness of being able to make changes up until the end. Models are the best way of discussing the project both as a whole and in detail, especially when working as a team. This is how we work every time, whether it’s a small project or a large scale one. 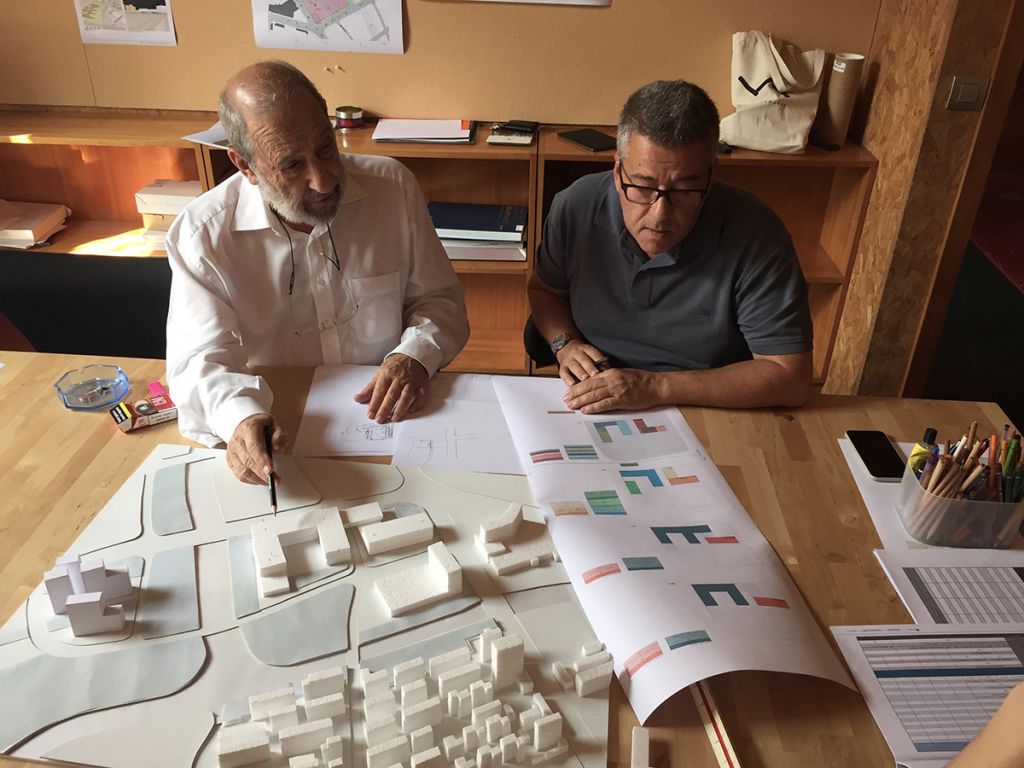 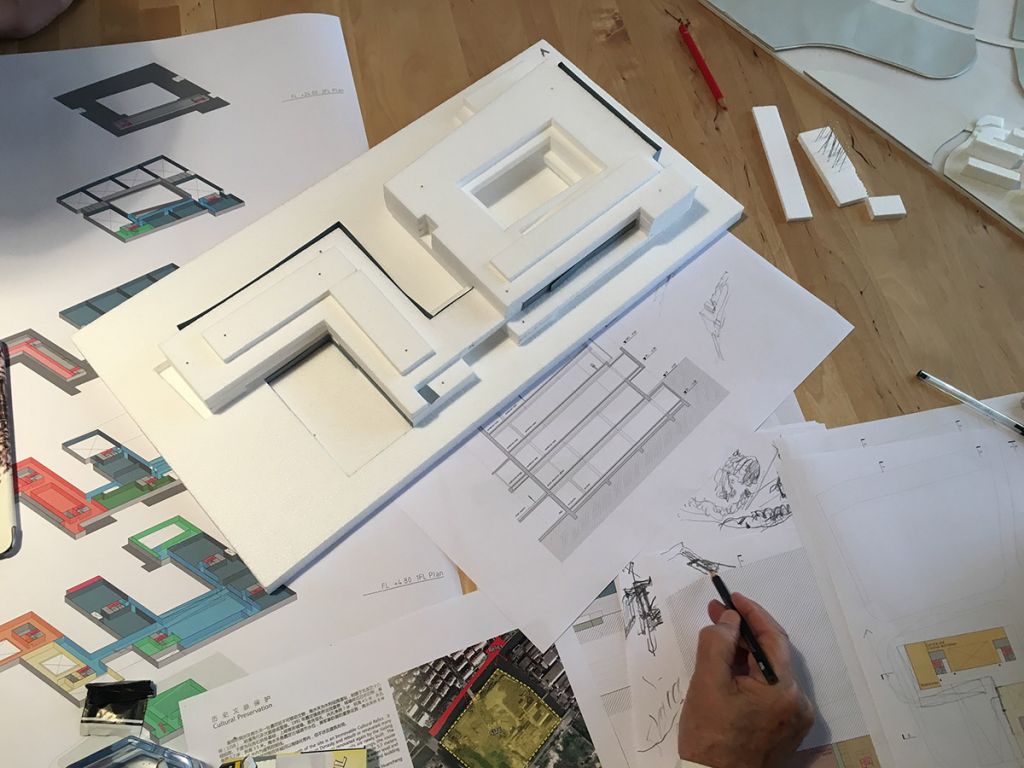 The Design Museum is very different from your first project in China, being part of the China Academy of Art (CAA) and having an important educational role. How did it come to be, volume and structure-wise? Were there direct influences from the Bauhaus collection that would be at the center of the complex?

It started with a close examination of the site. There are two things that are very important to us: the site has to be interesting, and if it does not draw us in, we renounce the project; and we have to establish a relationship of empathy with the client. As for the Bauhaus collection, sadly the Art and Design School chose to work with a different team on the layout of the permanent exhibition. We only worked on the “Álvaro Siza – Beyond Architecture” exhibition, which was a temporary one. I, personally, am not thrilled with the result. It’s a rather common situation in China – the departments make separate plans and do not communicate with each other, it’s a shame. 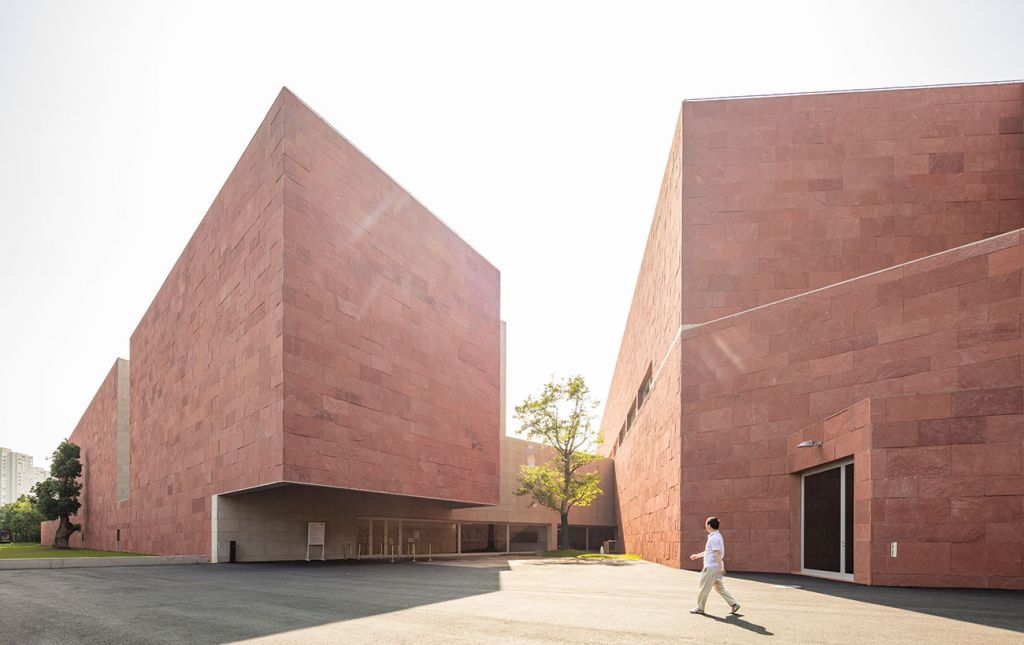 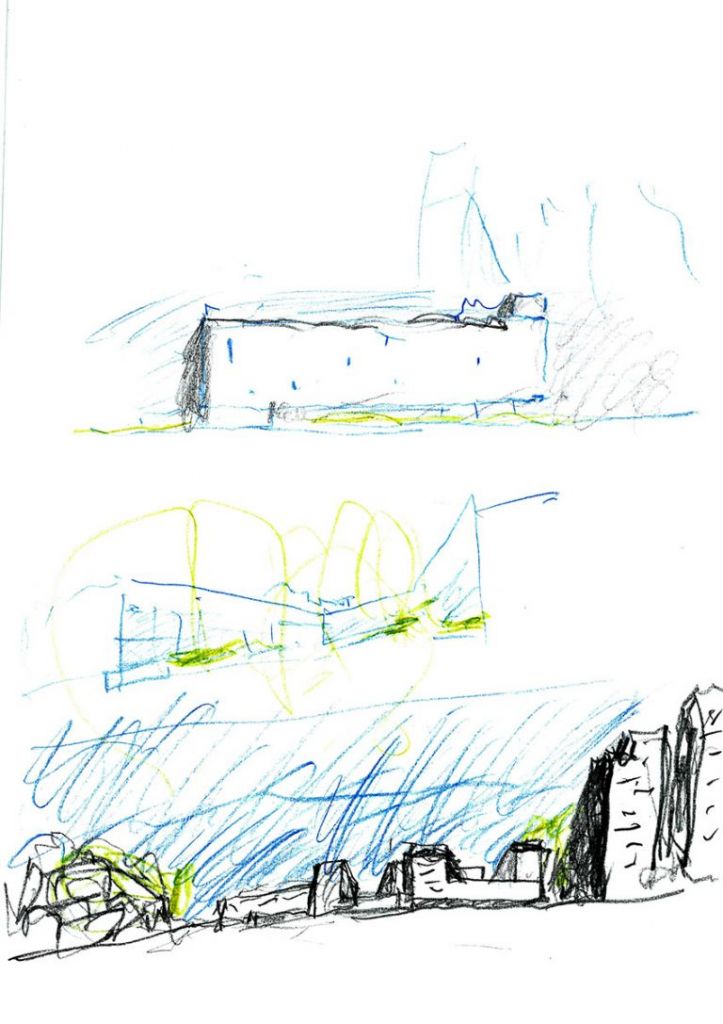 This year [2019] marks an important anniversary of the Bauhaus movement. What is your relationship with the aesthetic of the group?

The Bauhaus movement represents an extremely important phase in the history of architecture and art in general. I wonder what it would have been like had the war not radically changed its trajectory; I think its influence on our way of life would have been even greater. Or perhaps not. As in the case of any myth, it was a pleasure to be involved in a certain way, to become a small part of the story.

Have you visited the museum after its opening? How do the students and visitors interact with the spaces, is it a lively part of the campus?

We took part in the official opening, and went there two more times afterwards. I was amazed! One of the things initially requested in the program was a large entrance/reception area, a huge space; we thought it was too much in terms of scale. It took a lot of negotiations to reach the built version, of more appropriate proportions. But even so, the resulting space is quite large, but for the benefit of the students. I thought it interesting that people, young people, use the building with respect. I think they like it.

It appears that the projects you work on in China/Asia become increasingly large in scale. Tell us a bit about the complex of the Haishang Museum. Is there a set inauguration date?

The Hishang Museum is a collectors’ museum located in the city of Jiading, a part of Big Shanghai. The site is very interesting and in a good relationship with the old city, with a long history and an extraordinary circular plan (it is surrounded by water and crossed by two rivers). Since we are talking about a very large building, we tried to make the volume not have a strong impact on the site. An inauguration date has not yet been set, we are currently waiting for the construction works to begin; they are planned for mid-May. However, construction has already begun on two other major projects in China: Ningbo – Museum of Art Education and 5 Villas. 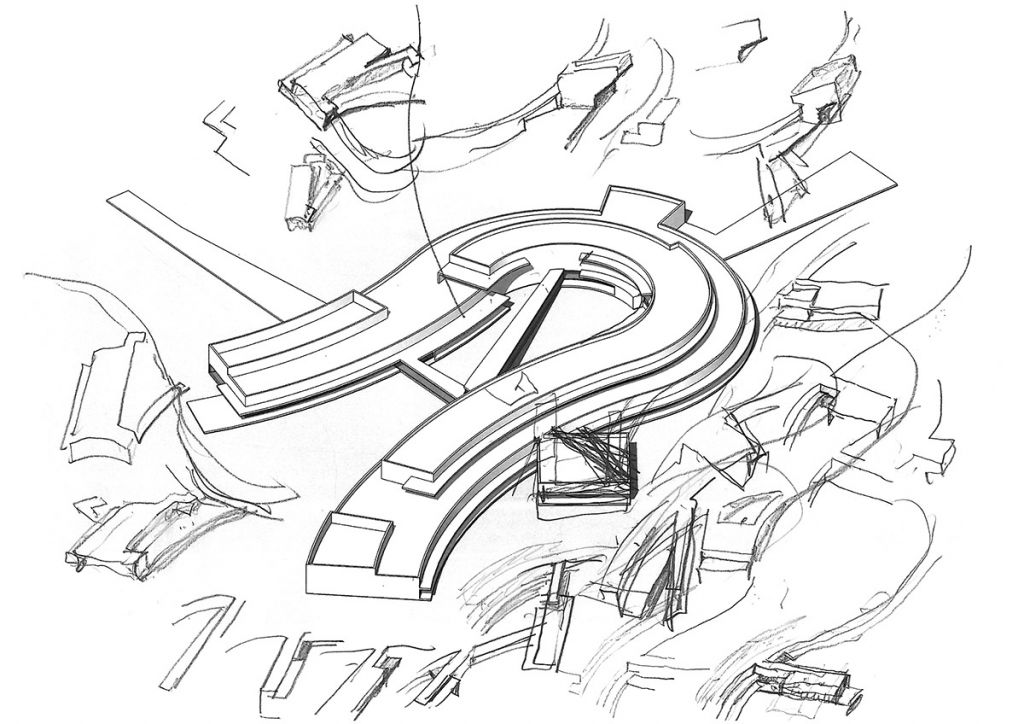 Sketch for The Building on the Water

What values would you like your China projects to convey?

I believe that we are, first of all, architects who try to reach as many of the requirements of a program as possible. And I believe we achieve good results in most cases, since many of our clients apply for our services for more than one project. On the other hand, I am aware that there are also plenty who don’t like what we build. But it’s all right, this is the world we live in! What is important is that we do what we do with a lot of enjoyment and with passion, as each project involves a lot of work. 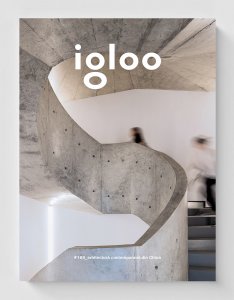