A new green diagonal axis extends into the very heart of XXI century Barcelona.  It is a natural path for pedestrians and bicycles as protagonists of a new era of a greener and more habitable metropolis, which is in direct contact with its natural surroundings. The initiative is a key to improve biodiversity and a stronger urban ecological role of the city.

The project is being developed by the urban design and landscape architects of West 8. „El Camí Comtal will finally connect the Sea and the Mountains, Nature and City in Barcelona. It strengthens the landscape experience for those approaching the sea from the coastal range through the city.  It offers a unique opportunity to unimpeded travel from the wildest Catalan Pyrenees to the heart of its capital city” they say. This green track enters the city through the natural valley of Besós, finding continuity in the new El Camí Comtal park or La Sagrera linear park.

„A generous shaded way for pedestrians, bicycles and skaters who will discover the different environments through the neighborhoods of Sant Andreu and Sant Marti, the park of El Clot, the historical gardens of Ciutadella to finally end up at the sea.”

El Parc del Camí Comtal gives a breath to the bustling city of Cerdá, introducing a new green SLOW cross as a counterpoint to today’s urban frenzy and activity represented by the other Diagonal. It is also a milestone track where landscapes, architecture, history and the installation of water fountains enrich its tour and make a memorial to the old Rec Comtal infrastructure that was carrying once the natural water resource to the city.

The visitor who arrives to the new Parc del Cami Comtal either by train from elsewhere in Europe, by bike from the mountains, or on foot or by public transport from the city, will experience the benefits of a green welcome carpet to the city replacing the old iron scar where the new La Sagrera linear park reflects the identity of its historical neighborhoods, allowing at the same time, an optimum green connection between landscape and city.

The great platform that will cover the railway and public and private transport infrastructures will enable the creation of a large park almost 4 km long and with an area of more than 40 Ha, the largest new urban park in Barcelona. This green area will be a primary component of the general system of green areas in the city and will directly serve the nearby districts. With its construction, 180,000 people will be under 10 minutes away from this piece of the great metropolitan scenery.

The district of Sant Andreu will double its present green area. The integration of important transport nodes in the park itself (La Sagrera High Speed Railway, Sant Andreu Comtal station, Metro and bus stations) combined with intense collective uses (sports, areas for cultural acts, etc.) will generate a pole of attraction to complement the powerful urban nuclei now unconnected around it (the old quarters of Sant Martí and Sant Andreu, the Maquinista area, etc.). The intermediate areas will combine strolling and relaxing, crossing the park and cycling. The quality of the area will therefore be enriched by a sequence of citizens’ episodes thanks to the diversity of possible uses and the existing and future urban sections. The park will connect districts historically separated by the presence of railway installations and will be the main identifying element of the operation.

Along the Linear Park, different new open developments will be made to generate a new fabric that must serve as a transition towards the existing city. 40% of the 25,000 new homes will be protected and a balance will be planned with the commercial activities of the whole of the complex (around 30,000 jobs) to produce mixed fabrics enabling the people living in the area to work there too.

„Sagrera project is intended to be an operation integrated physically and conceptually.”

The two main layers of this multi-layer project, the surface and the subsoil, will therefore be intimately correlated like a living body. A correlation that will enrich them mutually: a new urban area extraordinarily well served by public transport, a park with services and new uses, a large central station and exchange node for different forms of transport. A compact area for its layout and density and to the amount of different uses and activities focused there. The surface, the area of life, work and leisure, is formed on the one side by the public space (streets, squares and green areas) and, on the other, by the building sectors. The Linear Park, an outstanding element of the great metropolitan scenery, will be the principal factor providing the surface structure, the space overcoming the city’s former barriers, the trunk of the operation. The subsoil is formed by the different transport and service infrastructure networks, systems which supply the surface, the city of people. These are systems that resemble the blood flow or the nerves of a human body. The structures that contain them are the body, the spine that supports the chest and limbs. The station is the paradigm of integration of city and infrastructure, surface and subsoil. It is the point where the systems exchange and where the city more clearly experiences it’s multilayer quality. The station, a station of stations, will be the heart of the operation. 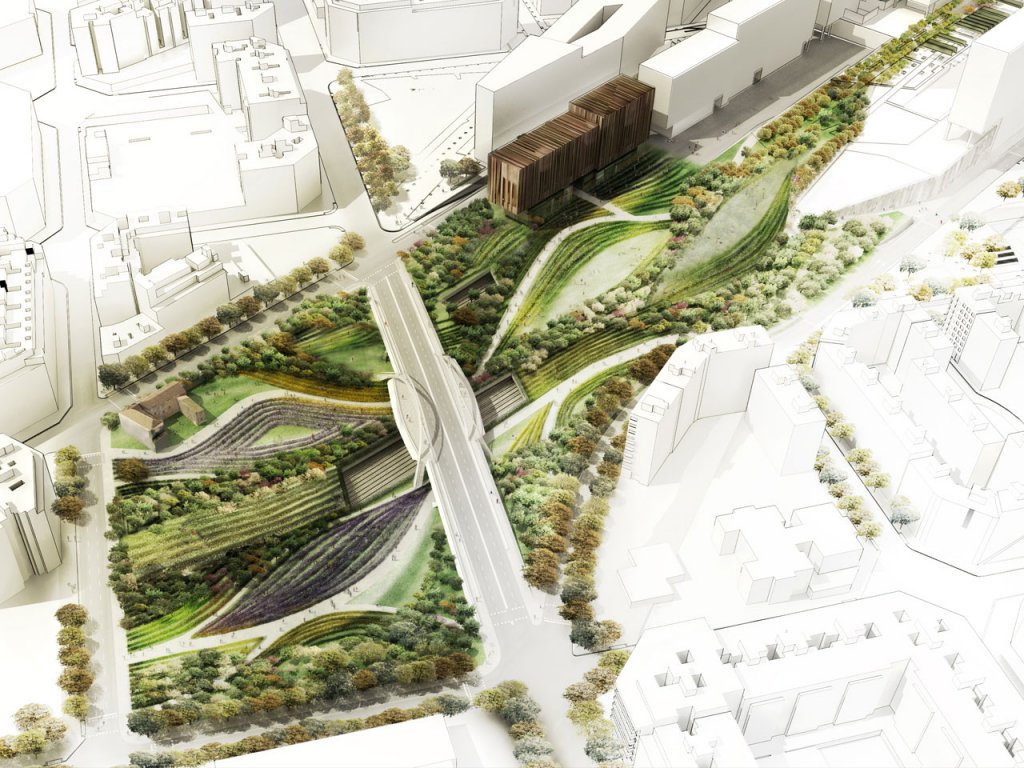 The aim is to achieve greater social cohesion by announcing a territorial identity and reducing movements between places of residence and workplaces. The tertiary activities are concentrated on specific poles, whereas the housing, the local trade and other productive activities are dispersed around the area. The Central Station therefore is intended to concentrate offices and hotels around it to take advantage of the optimal accessibility offered by the infrastructure and its central position. Halfway between this main core and the la Maquinista shopping centre is the building of great symbolic value, a metropolitan unit serving as an articulation and a connecting point between Rambla 11 de Setembre and Rambla Prim.