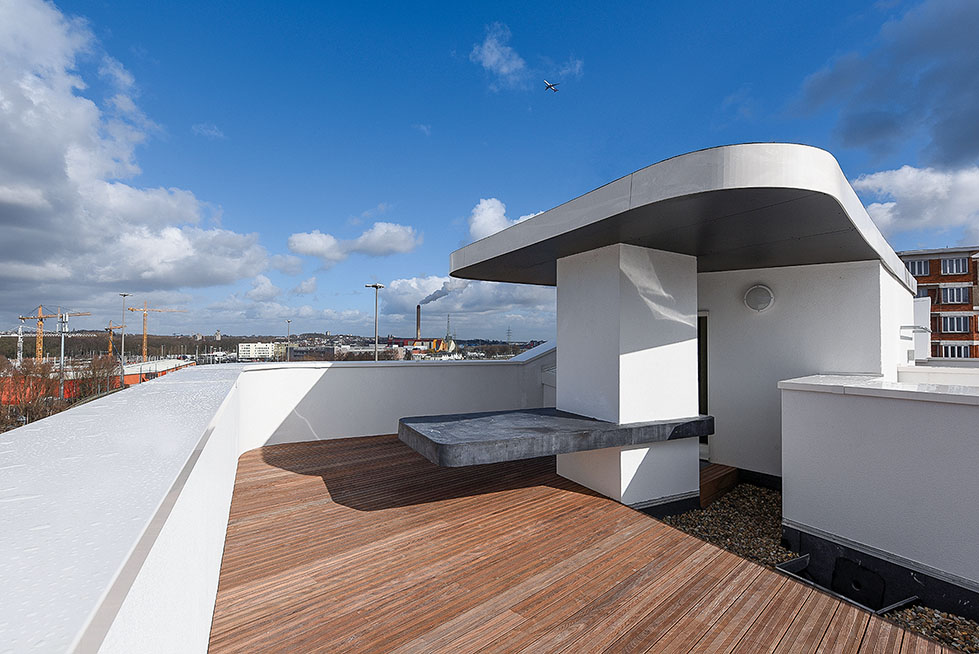 The Navez Building – A Specific Response / A Passive Building

“Like the other Art Deco and Neo-Gothic buildings in the neighborhood, which argue for a real desire for architecture, the Navez building tries to leave its mark upon the context through its game of designs and wide-angle geometry” – MSA.

Located in the north of Brussels, at the entrance to the city, overlooking the Van Praet Bridge, the Navez building contains five social housing units for large families, and the building is energetically passive. The construction is relatively small in size, with five levels offset in the central area, but the intensity and pertinence of the approach are surprising.

Navez is an example of a project that responds specifically to the site, whose determinations generate and are part of the architecture. The MSA design team works according to the principle: “An architectural project is a form of action on a situation and a context, not the signature of an author.”

The corner placement offers the architectural intervention the possibility to complete the urban silhouette of the front, but also to articulate its volumetric identity on the site. “The originality of the building comes from its section treatment, which articulates the spaces of the apartments in a decreasing sequence, ‘at half level’, connecting the common areas with the private corridors. The four floors are easy to navigate, they take advantage of the views, capture the light (North and South), and offer multiple spatial experiences” – MSA. 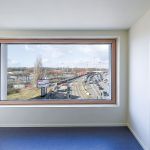 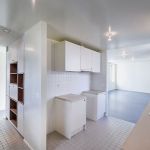 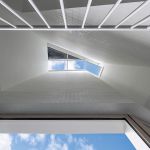 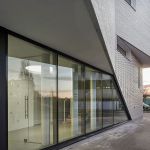 The architects of MSA made an interesting choice in the ceramic finishing of the façade, with glazed white tiles, whose behavior in the light changes with the time of day or according to the atmospheric conditions. The texture of the plating of the NAVEZ building is integrated, through graphic similarity, into the drawing of the façade of the adjoining building, to which its blind wall is attached, aligning itself with the built front of the street.

The clearing of the ground floor and the maintaining of a minimal built support, in contact with the ground, gives the building grace and a modern feeling of floating. The building is accessed through a glazed area on the ground floor that makes the hall space transparent to the street and brings the city inside.

The relatively narrow site makes the mass plan of the collective housing building generate a yard to the South, in order to develop its East and West façades. Through this spatial arrangement, all the apartments of the building open in 4 directions, through various exterior surfaces, and manage, through a careful energetic behavior proposed by the project, to be passive.

The stairwell relies on the encounter between the white parietal body, delicately textured by the ceramic plating that defines the vertical contour of this space, and the robust image of the concrete of the stairs. The metal railing formed by double stair pillars and cylindrical tubes, of constant section, is also continued in the corridors, and its white image is well integrated into the environment. Light fixtures in the form of simple fluorescent tubes or LED-type lighting are installed in parallel with the stairs. 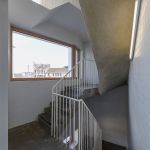 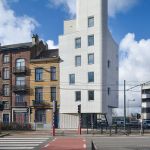 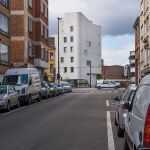 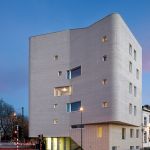 Inside, the simple finishes, in harmony with the space and its natural light, outline the truly bright apartments. The ceramic floors of the entrance areas and kitchens, and the simple polished concrete slabs of the rest of the spaces, make up the horizontal treatments. Some wall sequences include fixed storage furniture and the kitchen work area. White ceilings and walls, white furniture and white floors enhance the configured space.

The daily and nightly presence of the social housing building at the end of Navez Street is a sign that the town of Schaerbeek continues to be inhabited beautifully, the lights being generated by a passive building, a sustainable architecture. Regardless of the scope of the intervention, MSA attaches an essential importance to the context in which the project is carried out, in order to enter a dialogue with it.

“We are truly convinced that any architectural or developmental act is an act of transformation that takes place over time and, therefore, must go beyond the strict limits of developing one’s own language. By reading the context and understanding the qualities that are to be emphasized or removed, we can achieve this goal in a sustainable way” – MSA.