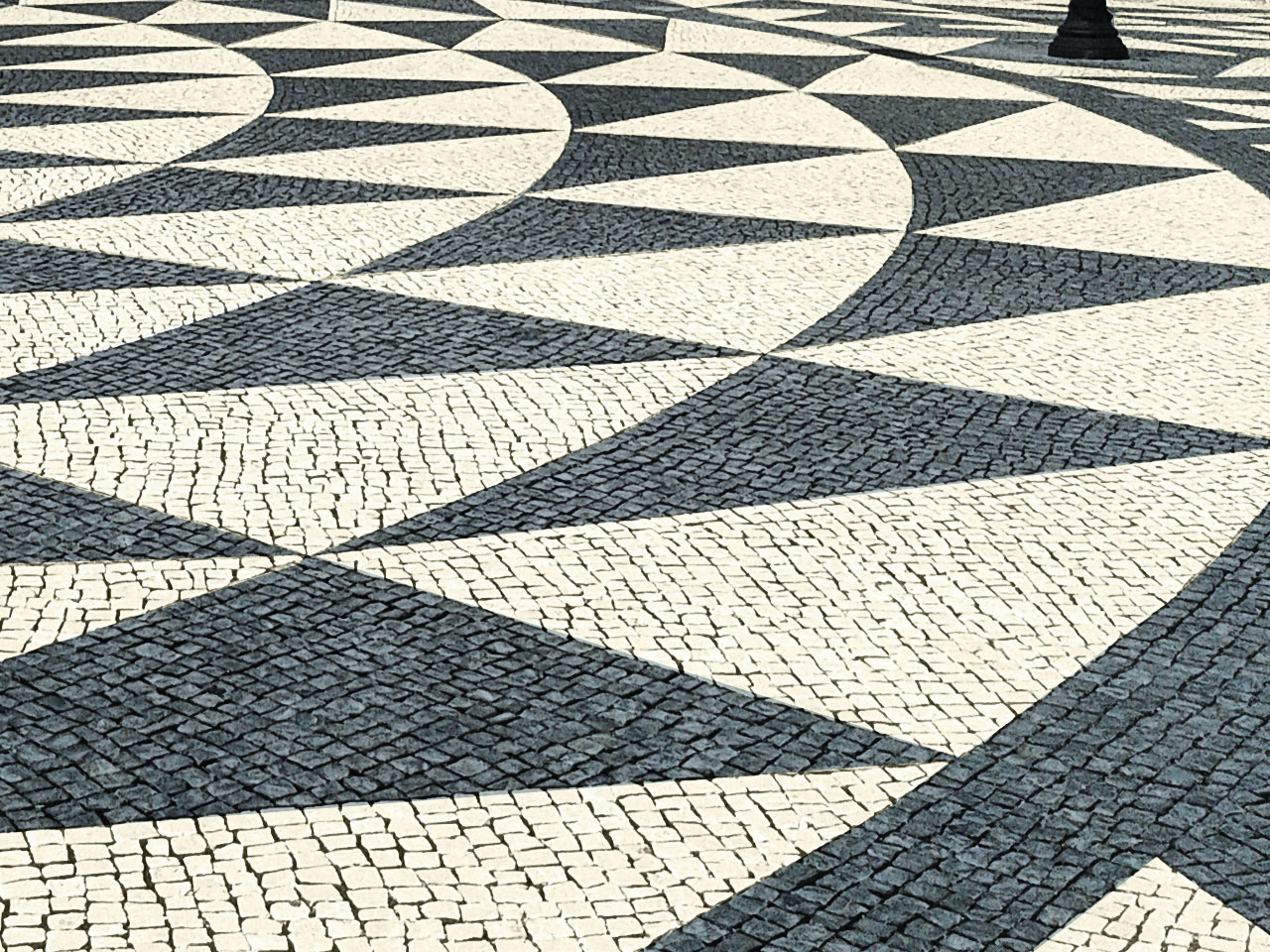 Travel in Patterns | Pavements of Lisbon

More than a century before Op Art being stated as an artistic statement, the Portuguese pavement was already transforming the urban promenades into big abstract canvases. Here’s a short selection of some interesting cobblestone patterns of Lisbon.

There’s something very special about taking a walk in any city of Portugal, and that special thing is right under your feet: a diversity of geometrical, floral and symbolical patterns unfolds, in black and white, on the walkways of any city center. It is in Lisbon that we stop now, take a walk and find out some stories.

A simple paving of small, irregular cubes of stone, usually in white and black, originating in the Roman mosaic techniques, became custom for all urban spaces of Portugal, especially from the 14th century, when king João II made it compulsory. Then, after the earthquake of 1755 which devastated Lisbon, cobblestone became practically ubiquitous as it was an ingenious way to reuse the earthquake rubble, therefore the city was covered in small limestone and basalt pieces creating black and white patterns without the use of cement.

Calçada portuguesa shortly became a work of art, as the models grew more detailed and the architects and the designers created visuals especially adapted to the shape and destination of the paved space.

Rua Garrett is a pedestrian street filled with history, fashion and nice cafes and restaurants, one of the most vibrant spots of Lisbon, the place to find the famous Café A Brasileira as well as the oldest bookshop in the world or some very old interior elevators. 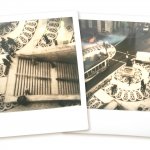 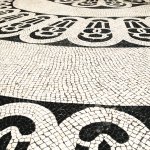 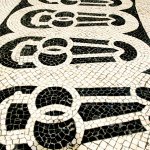 The pavement pattern, here, spreads in perfectly concentric circles over an irregular urban shape which starts like a square and then conveys into a street.

By the way, the Polaroid photos are to be found in the Fabrica Features store and are part of the Impossible Project in Lisbon. You can take photos with your phone and also make them analog, using their device. In Lisbon there are already 4 shops and in Bucharest you can go to F64 near Unirii Square to find them.

Such an especially designed space is Praça do Município, completely changed in 1997. 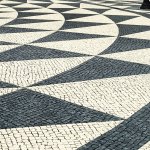 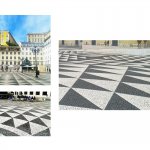 The project for the exterior spaces belongs to the architect Francisco Silva Dias and the pattern – to Eduardo Nery, a contemporary plastic artist (1938 – 2013) with similar creative approaces as Victor Vasarely, and author of several urban designs, from the Water Museum to one of the most spectacular metro station of Lisbon and from architectural facades to projects like this pavement.

Creating op art in painting, drawing, art installations, architecture and urbanism, Nery started, in this project, from the intention to achieve a single type of surface with a center of interest.

The unity is given by the use of a single geometrical shape, a triangle, with minimum variations of dimensions (so that it fits the different circles or some difficult shapes to be found on the edges of the urban space) and the pattern describes a series of concentric circles and a carpet of elements having the square as central element. The surface on which the design spreads is of about 60 by 78 meters.

The center of Praça da Restauradores is a game of lines crossing each other in straight or 45 degrees angles. 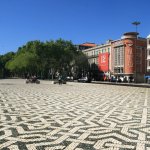 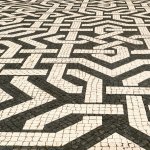 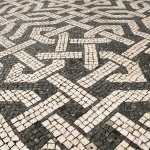 The main module of the design does not repeat in the same position. It is rotated, translated and mirrored, so that it becomes part of what is called a plane crystallographic group.

The pattern belongs to architect João Abel Manta (born in 1928), who is best known for his cartoons, widely published in the local press, and which stand for his political views and interventions, and also for various modern housing projects in Lisbon, as well as for his paintings, ceramics, tapestry, mosaics, illustration, and graphic arts.

The artist has as many aesthetic views as techniques: modernist in architecture, close to Impressionism in paintings and abstract in his urban works.

A Short History Around the Pattern of the Waves

Maybe the most known and photographed calçada pattern is that of the Rossio Square of downtown Lisbon, that being the reason for which I make the story more detailed here. 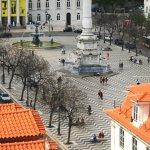 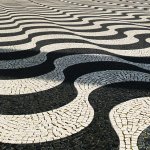 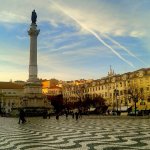 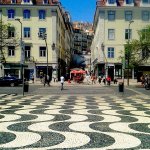 So, it is to a military figure that we owe some of the most famous designs: Lieutenant General Candido Pinheiro Eusebio Furtado, governor of the São Jorge Castle of Lisbon, had a vision of transforming the pavement of the castle’s park.

His soldiers work to turn the area into a carpet of white limestone pebbles with a zigzag in black basalt stone, where there were introduced flowers, trees and also mosaic. That was the year 1842. The park of São Jorge Castle quickly became the favorite place for Lisbon city walks, which led to city council’s recognition of the excellent work of military engineer Eusebio Furtado and also opened the road for further developments. In 1848, Furtado saw his project for the Rossio Square approved – a surface of 8712 square meters covered in white and black Vidraço limestone pavement and named Largo Mar (wide sea) in honor of the Portuguese discoveries. 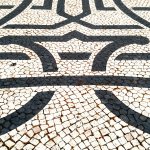 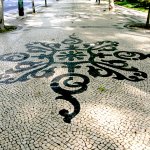 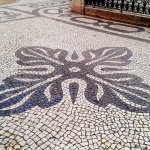 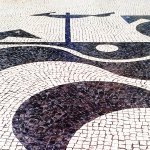 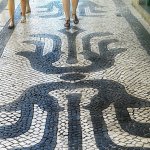 Calçada quickly became fashion all over the city, then spread throughout Portugal and then reached its colonies (Rio de Janeiro’s beachfront promenade or Macau’s squares designs are actually trademarks for these cities), then Spain, France and North America (John Lennon’s memorial in the Central Park of New York is a contemporary example).

The models of the patterns are extremely diverse and go from maritime inspiration (including, besides the waves, sailing boats or sailors nodes) to floral designs and pure geometry.