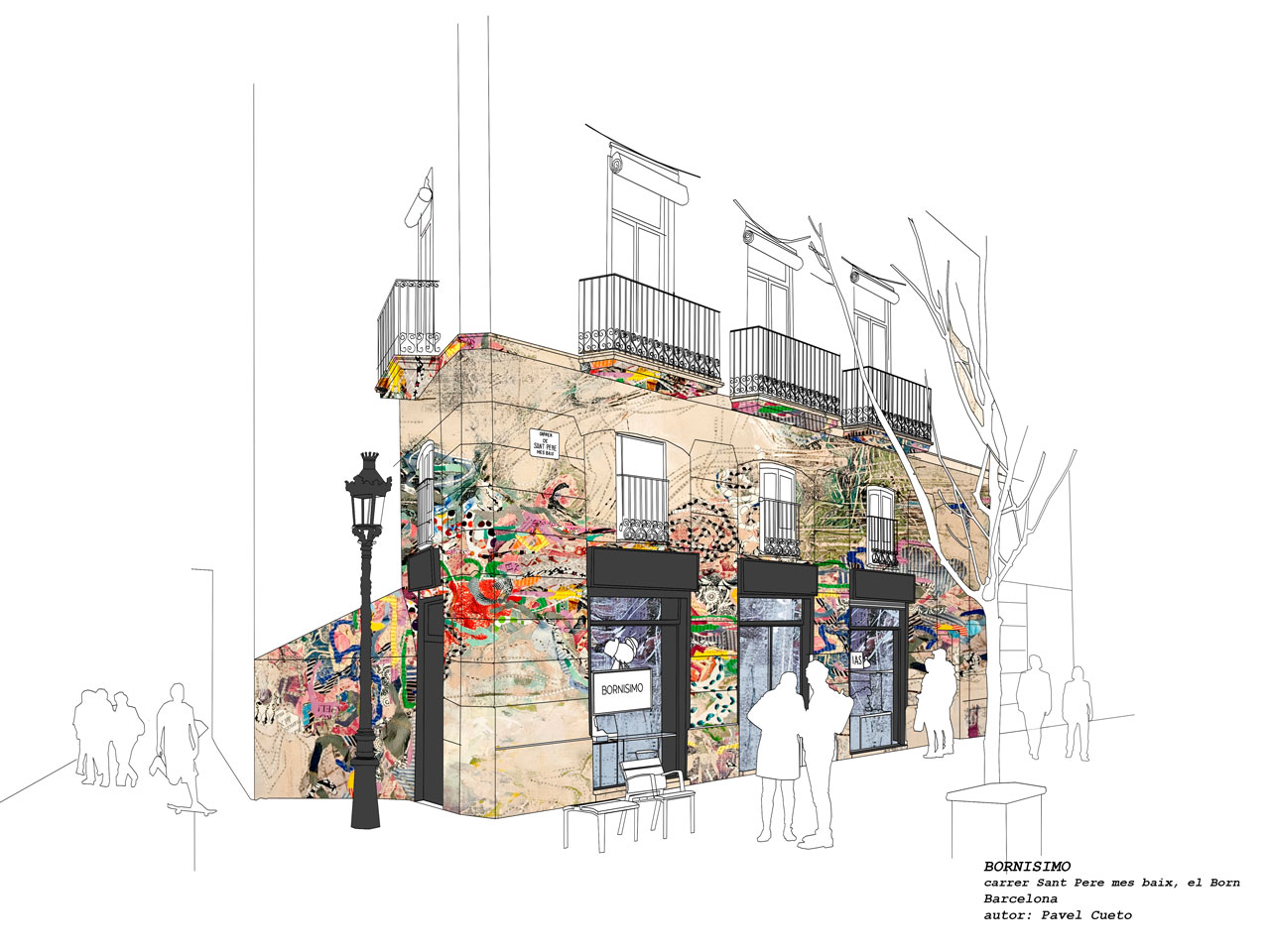 One of the most intensively used software for architecture, AutoCAD, is being given a poetical dimension in the drawings of Marsalada Design.

Architect Pavel Cueto Goycolea, who lives and works in Barcelona, founded his studio, Marsalada Design, with the precise purpose of illustrating the city and then turning the images into quality pieces of souvenirs:

“I strongly believe that a souvenir from Barcelona has to be designed here, in Barcelona.

So this is what I have been doing since more than 5 years, already: turning photos of iconic buildings into images that become souvenirs on paper, on folding paper, on clothes and accessories. The notion of a souvenir has shifted, over the years, from its initial beautiful meaning – that of an object to recall memories – into a bunch of cheap, mass produced, imported little nothings. And my aim is to turn the notion of a souvenir back to locally crafted, quality design”.

We met the architect for a chat right at his shop/studio, just a few steps away from Mercado de Santa Caterina, one of the essential stops of any vacation spent in Barcelona. 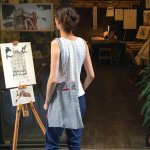 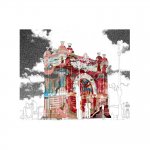 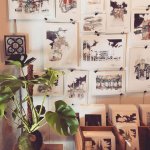 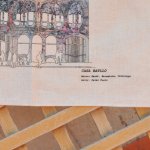 How did you start to illustrate in this specific way?

I started right away after having graduated Architecture as I was absolutely convinced that this is my way.

Would you please give us more details on your technique?

Usually, I choose a photo, then I redraw it in AutoCAD. I take special care in drawing the architectural object I am interested in, as well as the details around, so my drawings always include people, cars, bikes and surrounding architectural silhouettes. Then, once the AutoCAD drawing is finished, I turn to Photoshop to assign the collages into certain shapes of the drawing. 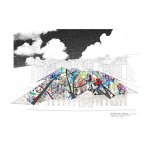 The Market of Santa Caterina (refurbished by arch. EMBT in 2005) 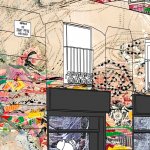 Bornissimo Shop – detail of the illustration 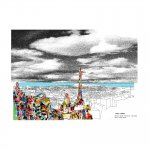 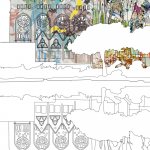 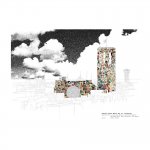 The Church of Santa Maria del Pi, a 14th century Gothic church in the center of Barcelona 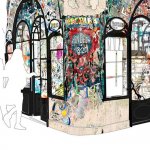 Pasteleria Escribà – detail. The bakery opened in 1906 and they were the first in the city to make butter croissants, one of their star products. The building was originally a pasta factory and was re-decorated by architect Antoni Ros i Güell in 1902.

How do you select the images that form the colored collage?

The collages are made out of cut magazines. Any kind of magazine. The content of the clipped images does not matter much, while the color or the pattern do: when I select a certain image for a certain illustration, I am always looking for colors and shapes and densities that reflect, somehow, the atmosphere of the actual, real building.

Do you have a favorite illustration? Or one with a specific history?

The first drawing I made was of Casa Battló. It was presented at the museum store, 5 years ago, and included in the permanent list of souvenirs that can be purchased there.

How do you select the buildings that you draw?

Most of my illustrations are museums, like Sagrada Familia; others are iconic places of Barcelona, like Mercado de Santa Caterina; then others are pieces of architecture that I am particularly fond of, such as Torre de gas natural of EMBT Architects – I am fascinated by the stunning cantilever of this tower, that seems to float effortlessly. Then, I have also been commissioned to illustrate some buildings, such as the shop Bornissimo.

What should an architect see, above all, when visiting Barcelona?

I consider that one of the most interesting sights, here, is the Pavilion of Mies van der Rohe – for the project, itself as well as for the contrast between the pavilion and the nearby museum, Palau nacional: both buildings were designed in the same time (Palau nacional was was the main site of the 1929 International Exhibition) still one project speaks of free movement and perception of the space, while another plays with static, Cartesian space – with a vision of left and right, front and back only.

I would also recommend a walk around the plaza of Hotel Vella, it’s a place from where one can enjoy the view over all the beaches of Barcelona, with the mountains in the background. 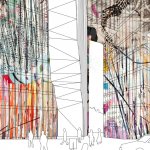 Torre de gas natural (arch. EMBT) – detail. The building, completed in 2005 and inaugurated in 2008, is an office skyscraper located in La Barceloneta. It has 20 floors, rises 86 m, and has an innovative and distinctive image, because the building has two lower horizontal glazed blocks protruding and cantilevered out from the main tower. 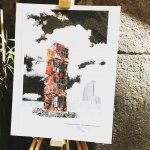 L’Estel ferit (The Wounded Shooting Star, sculpture, Rebecca Horn). The sculpture consists of four twisted cubes, stacked seemingly at random. Most people refer to this popular landmark as „the cubes”. It is a reflection of Barcelona’s penchant for ground-breaking art during the Olympic period and has a symbolism inextricably linked to the past of the Barceloneta district. 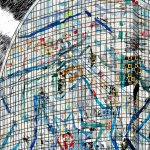 Hotel Vella (arch. Ricardo Bofill) – detail. Hotel W, popularly known as the Hotel Vela (Sail Hotel), was designed in the shape of a sail to remark Barcelona as a seaport town.

IGLOO magazine has got a headline: “a white magazine about spaces”. What does white mean to you?

I started my studies at the Amereida School of Architecture in Valparaiso, Chile – where, before actually drawing the project, we had to make a model of it, in white paper, to express the idea exclusively through white on white, through a game of shadows and proportions between built space and void. One of the most important rules was that nothing that was not in the model could be added, meaning that you could not compensate with words what there was not shown in your white paper model. 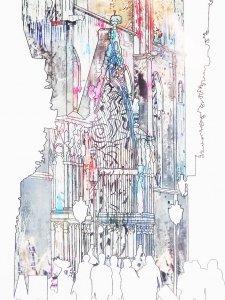 Pavel Cueto Goycolea was born in Leipzig, Germany. In 1970s his family had to flee Chile, escaping the dictatorship of Augusto Pinochet, thus Pavel spent most of his childhood in Europe, and Barcelona became for him a soul city, where he also founded his company Marsalada. In 2012, Pavel graduated Escola Tècnica Superior d’Arquitectura de Barcelona, and one year later began to develop the concept of his own company. Obviously, his thrilling and saturated life and architectural past have set a stamp upon his work. An infinite universe of forms, materials and textures from around the world, as well as the original artist built design are reflected in his works, eventually merging into a piece of art.