According to an already viral investigation published by The Guardian, concrete is the most used substance worldwide, after water. If the concrete industry was a country, it would be the third largest emitter of carbon dioxide, after China and the United States. And, as the global population will continue to grow over the following decades, it’s expected that, by 2060, a city equivalent to New York will be built every month. This climate crisis was the subject of the talk held by D. Arch. Mariana Popescu, member of the Block Research Group, at TEDxBucharest Metamorphosis, which took place on 16 and 17 November 2019, at the New Auditorium of the Polytechnic University of Bucharest.

The Block Research Group (BRG), in collaboration with the Chair of Physical Chemistry of Building Materials (PCBM), developed a new method of building concrete formwork, called KnitCrete.  The system, developed at ETH Zürich is based on a knitted technical textile, industrially manufactured and covered in a special layer of cement, in order to create a solid matrix. The utility and efficiency of the new technology were tested and made obvious in the process of the building of an experimental pavilion that reinterpreted the spectacular concrete structures of Spanish-Mexican architect Félix Candela Outeriño.

Called KnitCandela, the pavilion was built on the premises of the Mexico City University Museum of Contemporary Art as part of the first ZHA (Zaha Hadid Architects) exhibition in Latin America (10/20/2018 – 03/03/2019). The project was extensively presented in the 191st issue of igloo magazine, but, to be brief, we will say that KnitCandela, with a surface of almost 50 m2 and a weight of over 5 tons, was built on a knitted formwork of only 55 kg, transported from Switzerland to Mexico in just two suitcases, which shows that there is no need for a complex formwork that wastes material in order to create a wide range of anticlastic geometries (doubly curved surfaces known under the denomination of hyperbolic paraboloids). 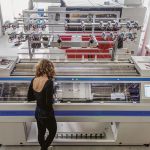 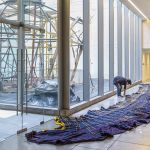 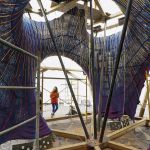 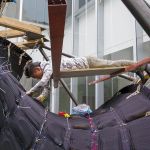 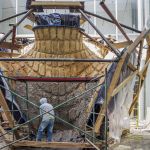 Did the technology dictate the aesthetic or was it the other way around, with inspiration subduing technology? Why Félix Candela?

M.P.: Candela relied on the combination of hyperbolic paraboloid surfaces to produce reusable formwork, thus reducing construction waste. At the time – in the 1940s-1960s – these “shell”-like structures could be built relatively easily, because the materials weren’t necessarily expensive, and neither was the manpower, although their construction involved a lot of manual craft.

Today, we aim to use less material, while the manpower is quite expensive, and therefore such geometries become quite difficult to make and this is where the notion of prefabrication and standardization comes in. The inspiration behind the geometry comes from him, in the sense that we aim to use optimized geometries, which are effective and use less material, but, at the same time, the geometry we used is not based on hyperbolic paraboloids precisely in order to show that we can take things further, that we can use the technology in a different way to reach the same result, lato sensu.

Nevertheless, in reality there are many cases where aesthetic reasons dictate the structure and materials. Doesn’t the adoption of the new technologies, including KnitCrete, also involve a change in mentality?

M.P.: Indeed, architects usually come up with these complex shapes mainly for aesthetic reasons that are justified in many cases, but we must not confuse parametric architecture with efficient architecture, and to me this is a very important aspect: geometries that are efficient from a material and structural point of view are, generally, curved and complex forms, but not all curved and complex forms are efficient. So yes, a change in mentality is also needed in connection with the way in which we think the project, but I believe it is tempting for any large firm with a budget for the building of such structures to see how they can be done in a different way and whether the technology can also be used for geometries that are not necessarily optimized in this sense. Therefore, we don’t start from the form, but we let the constraints and parameters of what we want to achieve dictate the rest.

In what time horizon will the application of the technology become viable, in order to have an impact on the climate problem?

M.P.: There are several answers to this question. On one hand, the object of our research is a digital manufacturing technology with a great potential, as it relies on a technology that already exists and functions, as well as on an existing infrastructure, and therefore it is relatively easy to use and involves low costs. Thus, at a small scale, for relatively small projects, I believe it can be applied now, and therefore we are focusing on finding how it would be easiest to transport and use in low-cost situations, precisely because it is light and involves small costs.

On the other hand, one limitation to this system is the geometry itself. Even with a flexible system (knitted textile or not) you can’t design any type of geometry at all, as it’s simply not possible. For instance, you could make something flat, but you need a lot of prestressing force and it becomes an inefficient way of making something. At one point, the geometry will simply tell you that there’s no use in continuing in this direction, although I would say that this is a blessing in disguise, because this limitation forces you to come up with optimized forms. Generally, alternative materials are less resistant, can carry less, so it becomes increasingly important for the structure to be a correct one, in order to use materials that are very light.

Does the future look “organic”?

M.P.: There is no “Holy Grail” of technology that will solve everything. Each of the new technologies, including this one, has strong points and weak points in relation to different things. Therefore, I don’t think that the entire planet will be covered in textile formwork, nor do I think that it has to, but this is one of the technologies that can already be used, while we keep working on its development, as well as on other solutions (recycled concrete, zero emissions concrete).

So, we will not all live inside organic structures, especially since the organic is not something that necessarily has to be seen, it can be a floor with an arched internal structure, while you will still be stepping on a flat surface, and these technologies rely on precisely this type of thing.