Tbilisi, Georgia: An Artistic Journey Between Tradition and Contemporary Glow

If you choose to visit Georgia, get ready for a voyage between worlds. The green of a still innocent and charismatic nature embraces a country whose ancient traditions such as wine and bread making are reasons of national pride and also a country where the ghosts of a post-industrial cemetery of ex-Soviet factories are still lingering. The capital, Tbilisi, a small gastronomic paradise of exotic names and cuisines: adjaruli khachapuri, khinkali, ponchiki, chacha, etc. proposes a charming journey on quiet streets where houses with porches and laundry let outside to dry coexist with church towers, art deco courtyards full of vegetation and street stalls selling pomegranates and figs.

Tbilisi also offers a surprising encounter with contemporary architecture like the laced canopy of the Peace Bridge, project of the Italian architect Michele de Lucchi. The statue of the imposing and loving Mother Georgia, a 20-meter silhouette of aluminum, work of the sculptor Elguja Amashukeli shines above the hills. During a walk through the old city area, among the sulfur-filled thermal baths – ancient red brick rounded blocks that shelter spas – one would not think that a few steps away, nineteenth-century houses, former factories or mysterious basements offer an inside view into the world of a surprising design.

Hotels, restaurants and contemporary-style cafés make up the network of a Tbilisi well connected to the effervescence of the world’s design. We chose, for this first episode of the new igloo magazine column, Travel Design, three great examples, worth to explore: a cozy boutique hotel with a copious breakfast, a hidden bar with the best cocktails in the city and a former publishing house converted in a small universe where books, a hotel, a café and many more are coexisting. 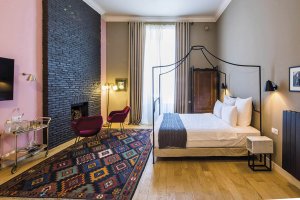 Right in the heart of one of the old neighborhoods of the city, Sololaki, considered the first bourgeois district of Tbilisi, a 1890 historically listed house has been transformed into a boutique hotel. Belonging to a Georgian general with revolutionary ambitions, Rostom Muskhelishvili, at the beginning of the 20th century the house was bought by a wealthy family of Armenian merchants. Kojori Street climbs and somewhere, not far behind it, one can guess, up on a hill, the green of the Botanical Garden. In the neighborhood it is said that many artists had found inspiration. Among them: Mihail Lermontov, Piotr Tchaikovsky or Sergei Esenin.

At number 6, a blue door marks the entrance to the Communal Hotel, a welcoming space where the hospitality and community spirit rooted in the Georgian DNA inspired the frame within guests are invited to experience a subtle and enjoyable „home.” A project initiated and developed by Communal Studio, the hotel becomes the scene of a meeting between history, neighborhood, street life, and contemporary design details with Nordic nuances.

Georgian designer Katya Samsonadze combined vintage or local produced furniture with modern elements that can be discovered as one moves through the space. An entrance hall dominated by books and a huge mirror is the livresque introduction of the door that reveals the hotel lobby and reception. A chic and warm atmosphere greets guests and continue in the rooms thanks to the blue-and-white chromatic range and to the artsy-industrial light fixtures.

The interior stairway connects the two important poles of the Communal: the terrace from where one can admire the Botanical Garden, covered with traditional carpets, nostalgic plants and furniture, and the kitchen, in the basement. The latter is the spirit of the hotel-house: a large table covered with traditional dishes and cheerful ceramics invites you to sumptuous breakfasts and spending time together. The small open kitchen only emphasizes the friendly, slightly nostalgic, but extremely contemporary, spirit of the place. 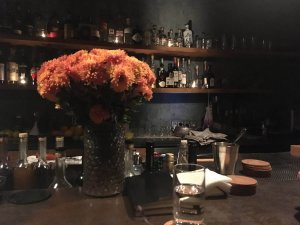 If on an autumn’s night a traveler gets lost on Galaktion Tabidzis Street in Tbilisi, he or she will most likely observe dead leaves sprinkled by rain and a not very intense public lighting. But if the same traveler enters an inner courtyard at number 19 and has the curiosity of opening a metallic door that seems a dead end, will discover the surprise of a cocktail bar.

The bartender Roman Milostivy initiated along with his wife the project of a charitable artistic bar, whose name was inspired by a group of artists from the Georgian avant-garde, „41 °” (41 degrees). A crowdfunded project, the bar intends to coagulate a community of art and beauty lovers by donating 30% of the income to support young artists. Beyond the story or the cocktails that Roman prepares jovially using ingredients written in black Moleskine-menus (the menu changes periodically), the place has a special atmosphere thanks to the minimalist design with meaningful elements signed by the owners themselves.

In the 41 square meters there are two main materials: metal and oak; the plating of the walls was made with decorative plaster and Georgian-style masonry in the spirit of the old city center. Desiring to have a great bar counter that can gather customers and bartenders, Roman and his wife turned to local craftsmen (Khararka) who work with wood and metal in traditional Svanetian style (Svaneti is a Georgian historic province).

A real challenge for the local artist, the four-meter-long and 1meter wide bar has become a real jewelry of oak boards combined with metal and decorated with Georgian motifs. Naturally, the chairs and the light fixtures were created in the same style, according to the owners’ sketches. And the wood used for the bar made its way also in the kitchen. The whole story evolved around the long table, the true soul of the place. 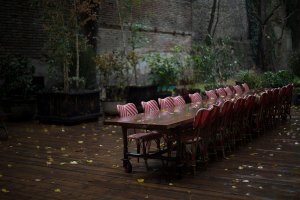 On the streets of central Tbilisi (Merab Kostava 14) one will discover the impressive building of what was once the most important publishing house of the country. Stamba Hotel, the symbol of a Georgian cultural and artistic renaissance, appeared between the brutalist walls of the former factory, which, while remaining faithful to its roots, went in the direction of an authentic style, at the confluence of Western Europe and the flavors of the Caucasus.

Stamba is a true labyrinth-story, the giant space of the former publisher house offering the good opportunity of setting up a hotel, a restaurant, a café, a casino and Tbilisi Photo and Multimedia Museum. Projected by Adjara Group’s in house creative studio, Adjara Arch Group, Stamba rebuilds into the industrial frame the splendor and fantasy of the 1920s and 1930s happily mixed with contemporary design elements to ensure the fluidity of the space. In the lobby you do not know whether you have stepped in the past or in the future or if you are in a privileged space that includes both.

A huge library embraces the space, and the personality features of the publishing house, such as the former print drying beam sink into the lush vegetation dominating the five-level atrium of the complex. Objects of the Soviet era meet with vintage pieces, in a nostalgic key, but also with contemporary details such as the glass-bottom rooftop pool that allows a glimpse of the ethereal silhouettes of people plunged into the aquatic environment.

The botanical garden of the atrium is complemented by an amphitheater whose dramatic effect is enhanced by the presence of a 1970s voltage tower, accessed through an arcade made out of the ceiling wood. The chambers offer the experience of a glam that harmoniously combines decorative art deco elements with the delicate durability of concrete and apparent brick.

Returning to the public spaces, we reach Café Stamba a welcoming and precious open space where the art deco mosaic and the Parisian bistro chairs offer the experience of an eclectic cuisine: traditional Georgian dishes are completed by international recipes. The space has its own Pink Bar, dominated by an impressive crystal chandelier. Another stop in order to delight the eyes and the taste is the area of Chocolaterie & Roastery, a boutique café where coffee, desserts and chocolate are roasted and handmade in-house. Do not leave until you try the national lemonade – Lagidze Waters, a combination of mineral water and various syrups that will remind you of childhood, even if you did not grow up in Georgia.