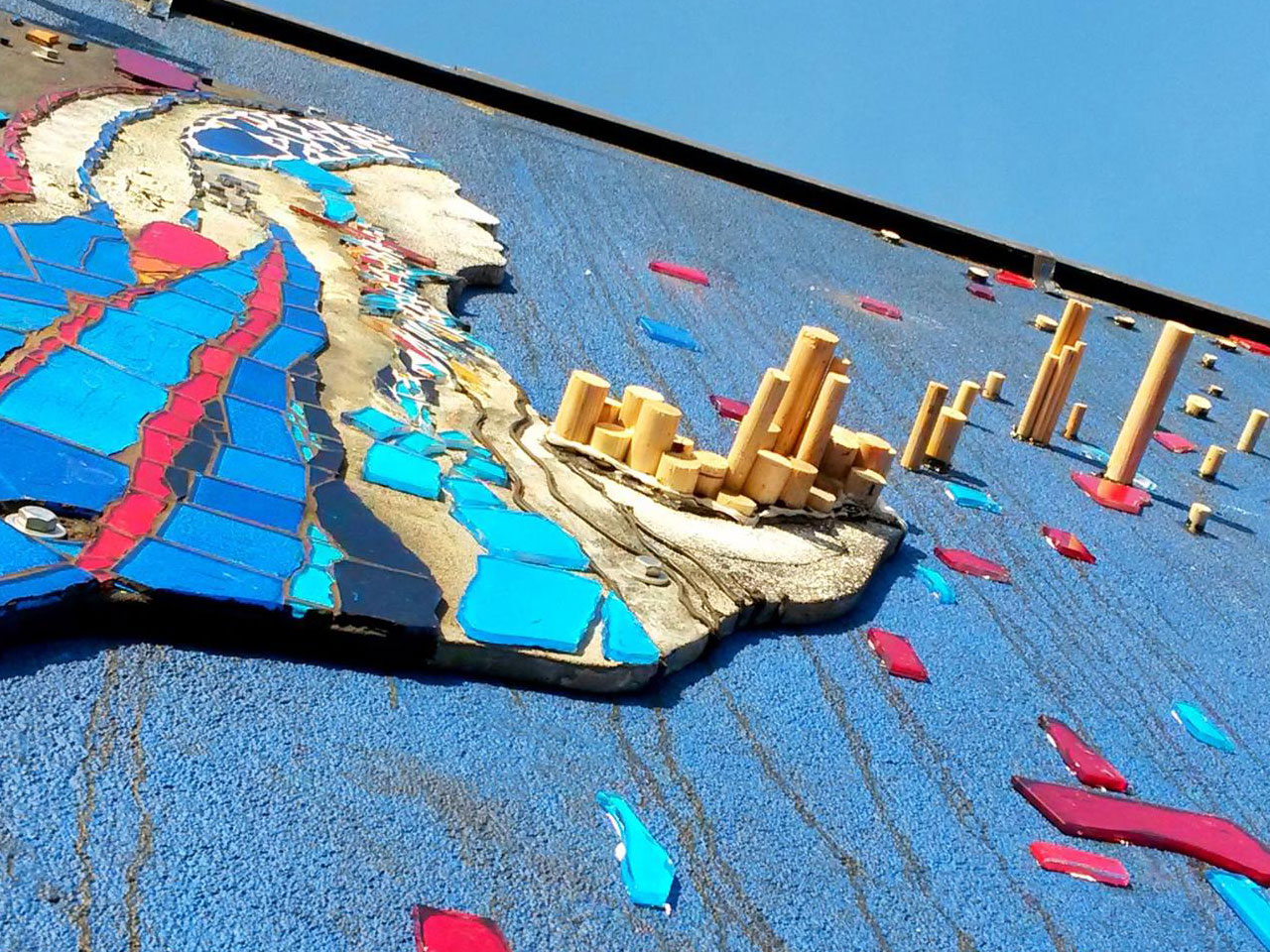 The City As Art Gallery: Łódź

„The main opinion of the citizens was that our city in general is grey, sad and neglected. The locals are very happy that we’re doing something with the empty walls” says the Art Director involved in one of the most original projects of urban reactivation projects, that of turning the built space into canvas for huge visuals. 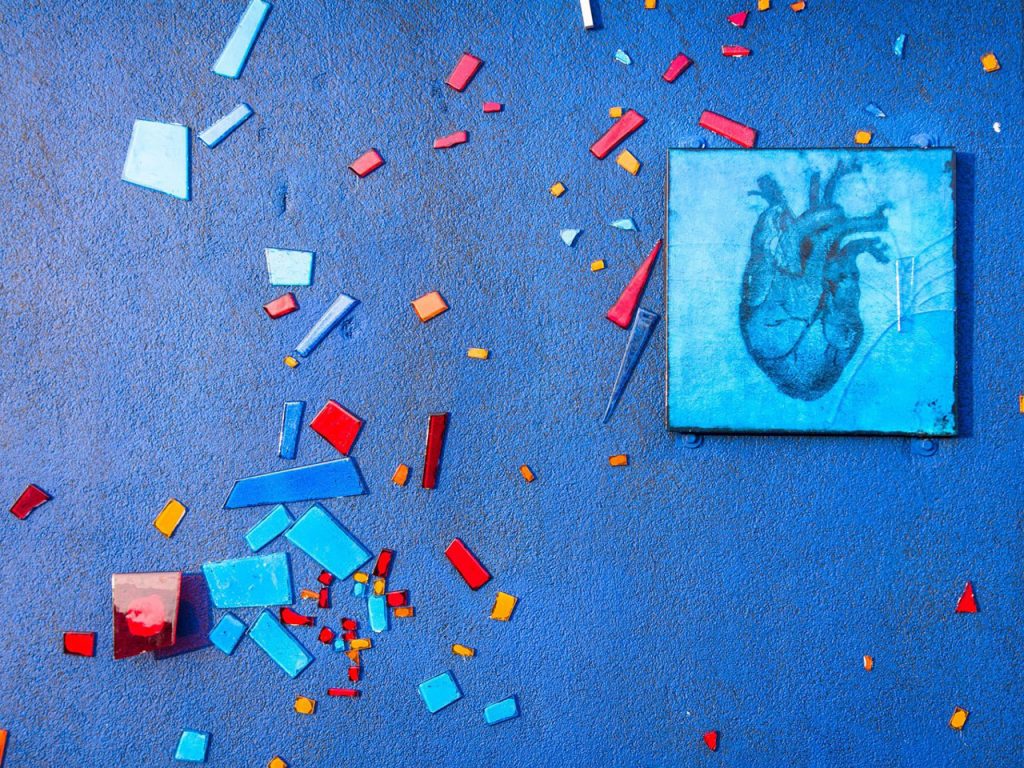 Following the focus of the IGLOO issue focusing on Polish contemporary architecture and urban concepts, we stop in the city of  Łódź, to have a conversation with Michał Bieżyński, Art Director of an original art gallery – an urban, open air gallery for grafitti artists from around the world. Since 2009, when the Urban Forms Foundation started its program, each year brought, on either historical, communist or contemporary facades of the city, new creations, so that today the number of big scale graffiti of Łódź is reaching 50 and the third-largest Polish city turned into a genuine Mecca for worldwide urban art. 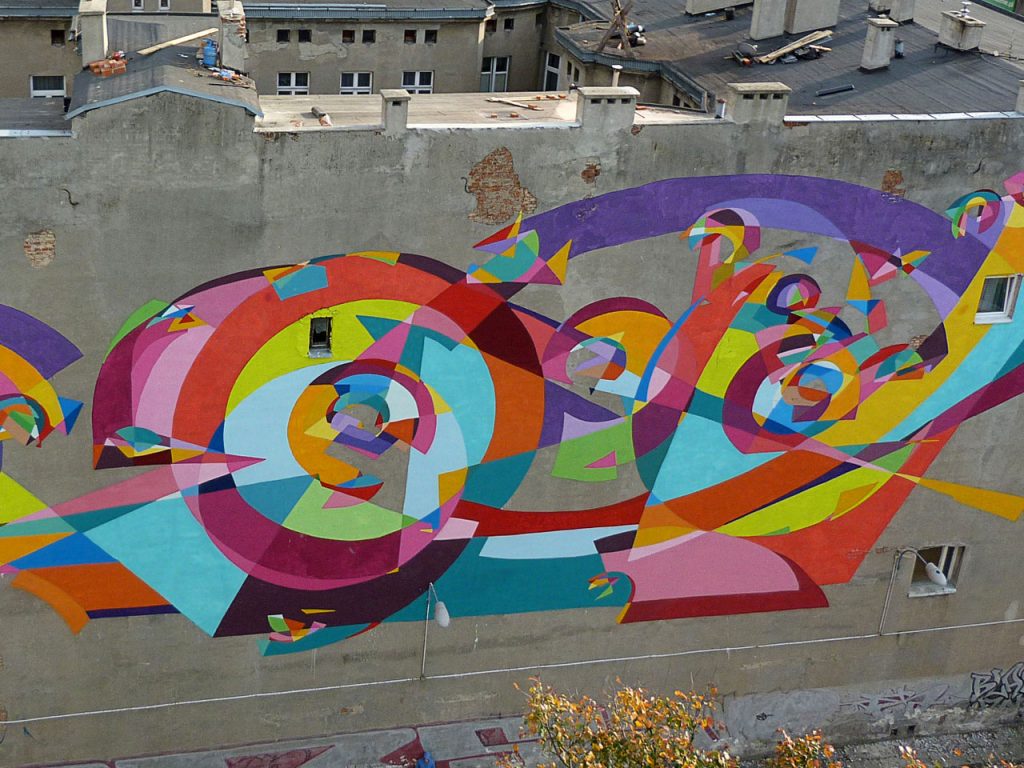 Can you please tell me, briefly, how did the Urban Forms gallery start? Who had the initiative? And what is the gallery’s mission?
The first time we presented the whole idea of the project in front of the City Council it was in November 2009. Since that day we had many meetings with the decisive people in the City Authorities – presidents, directors, coordinators, Council members – generally people in charge that could help us to get funds from the city. We thought that the Gallery project and it’s permanent character is so positive for the aesthetic of the city and the image of the city outside, that financial help from the City Authorities supposed to be something obvious. It took us 2 years to convince the City. After 2 years we finally get the first donation, but meanwhile we started to organize the first pieces in cooperation with many institutions, organizations, festivals, private companies and sponsors. Without any help from the City we managed to organize first 7 walls, that are still the part of the whole gallery. Exactly after 2 years, we finally received funds from the city to organize big thing – 1st edition of the festival – 6 walls with artists from Europe. It was in September 2011. Since that time, together with the City we’ve organized next four editions of the festival and we transformed the city center of Łódź into a great public space gallery.
In 2015 I quit working with the foundation and I continue my mission by working directly with the City of Łódź. Now, together after 8 years I’m responsible for the organization over than 50 large scale paintings in the city, but the quantity doesn’t count for me – the only important thing is the artistic quality. Taking into account this category, I would say that Lodz is amongst the top 3-4 cities in the whole world. 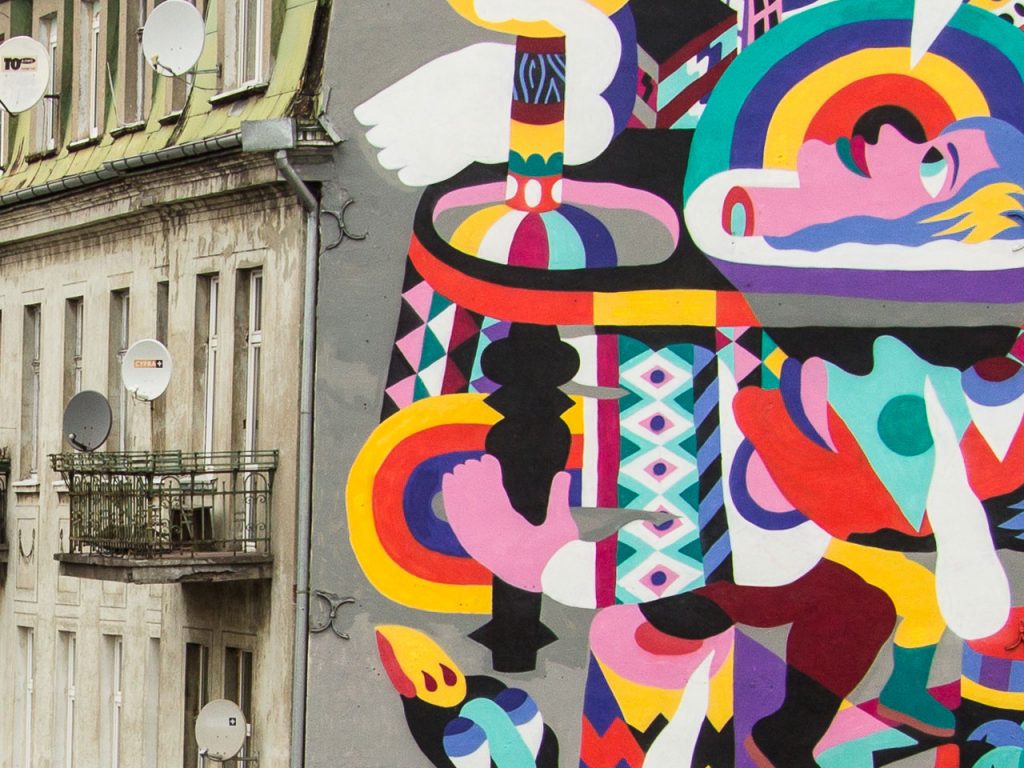 How did the citizens react, in the beginning? Were they open or skeptical to your plans?
The main opinion of the citizens was that our city in general is grey, sad and neglected. The locals are very happy that we’re doing something with the empty walls. Lots of people is not so much interested in the quality of art – they are glad simply because we’re bringing some colors to the city. Nevertheless, as I said before, the most important thing for me is the level of the artists that are coming to Łódź. It’s in the public space, it’s suppose to teach people, it suppose to work as a visual education, show them as many artistic directions as possible. That’s why we got so many different styles on the walls in Łódź. Taking into account all the commentaries in the Internet, facebook and locals in a “real” world, we have a really good feedback. People are feeling proud of the project, I heard many great stories! 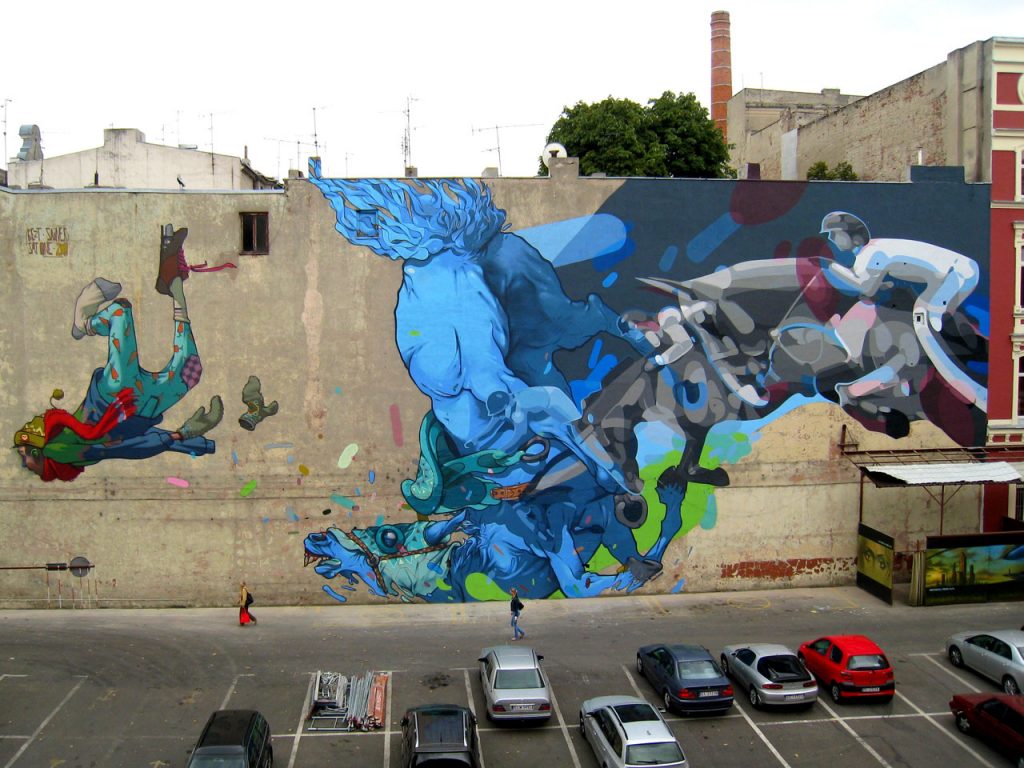 How does the gallery select the sites for murals? And the artists?
Between 2009-2015 I was working as a Art Director of Urban Forms Foundation and I was responsible for those “choices”. Since 2015 I’m basically doing the same, but working directly with the City of Łódź. I guess that this question leads us to the “artistic taste” and kinda “sense” about the quality of art in general. And this is very fragile and long, long topic. Nevertheless, considering the fact that location of the gallery is in the public space, I would like to make it attractive for as many citizens as possible, not only for those interested in street art or art in general. That is why I’m focusing on emphasizing artistic aspects, leaving too conceptual and too minimalistic projects as they might become unclear for the recipients. Furthermore, through an appropriate choice of artists, I would like to present as extensive and diverse palette of artistic conceptions and themes as possible. I really like the fact that people are talking about those murals choosing different wall as his or her favourite. In Łódź we got lots of distinctive styles: figurative and abstractive, realistic and more comic, colorful and monochromatic, very complicated and less detailed, more pictorial and more graphical… You can find pieces painted with stencils, curved into the plaster, painted with ink. Everybody could find something that is close to his or her aesthetic. I assume that’s the way it supposed to work.
When I’m chosing the locations, I’m taking into account mainly 3 conditions: the wall has to be clear, without any billboards and comercials; the technical conditions of the wall has to be at least stable; and the exposition of the wall supposed to be really good, where as many people as posiible could have the possibilty to see it. 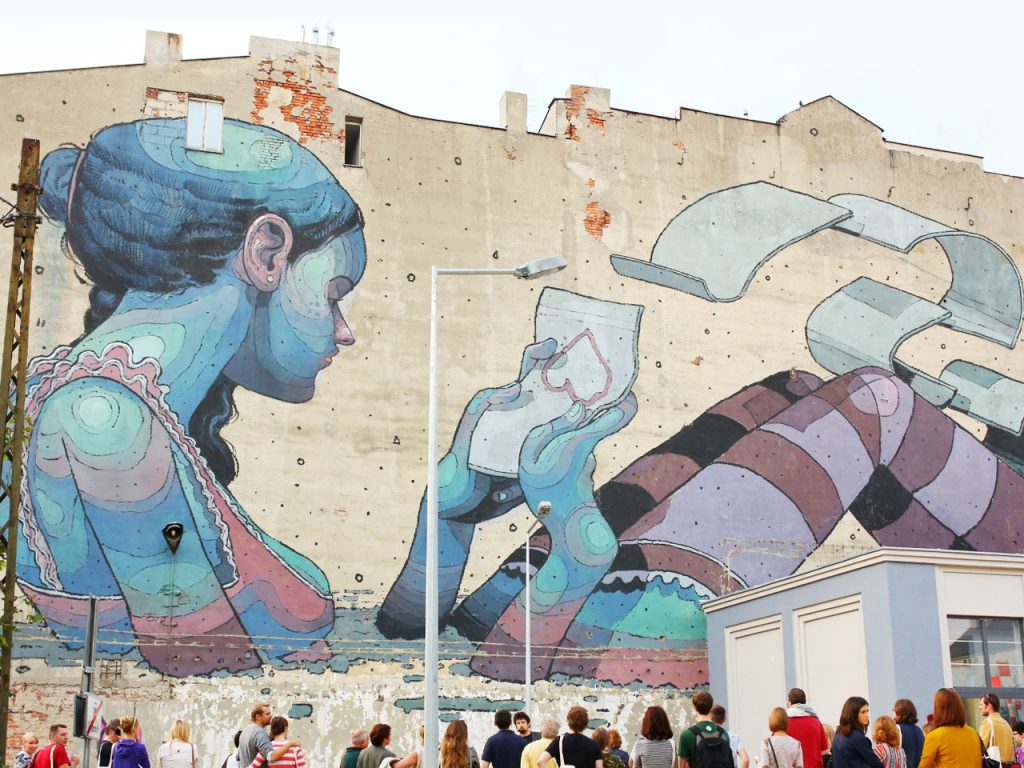 What does it mean, for you, to be the Art Director of the gallery?
Mainly the responsibility. I’m taking the responsibility for what thousands of the citizens of Lodz are watching every day single day when they are cruising around the city. Murals are not art installations, it’s a permanent thing. Usually they are large, very visible and located in some really exposed places. Few years ago I thought about such a comparison – during one day those walls see more people than all the paintings in all of the galleries and museums in Lodz during whole year. It sounds kinda spectacular and I guess it’s truth. So taking into account those pieces are in the public space, where You got mass audience, my role is to make them as artistically good as possible, Of course, it’s very hard to briefly explain in a clear way what is good and what is not, it’s not a sport where the only criterion are the numbers. 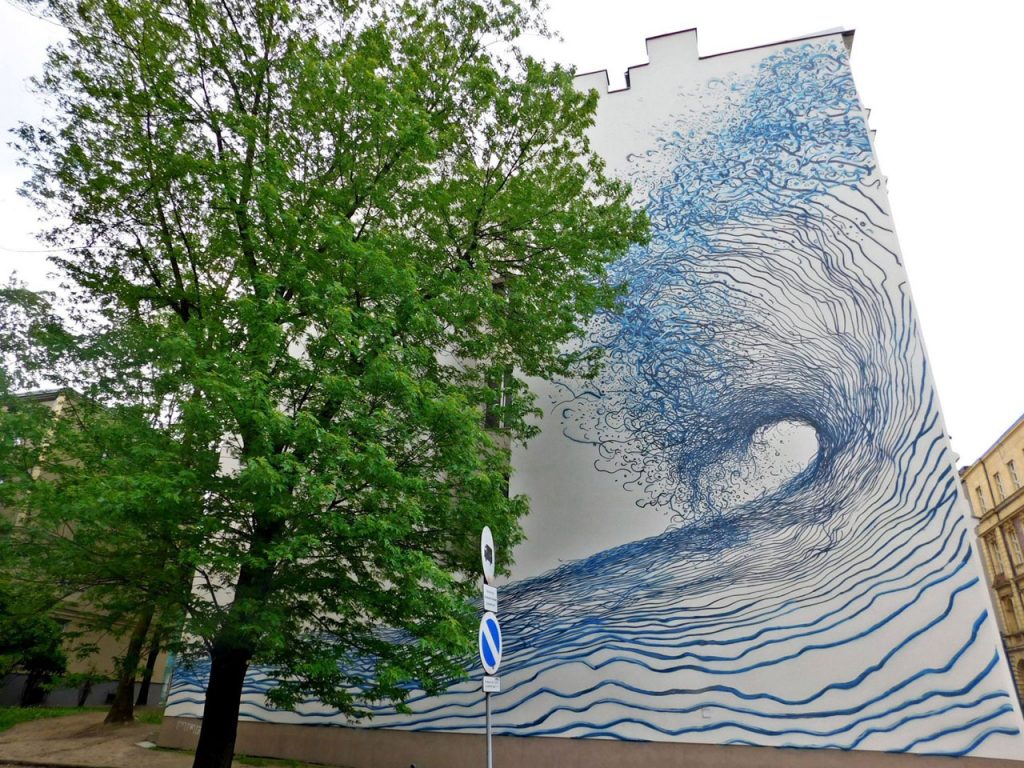 From your point of view, are there any particular features of the Polish cities?
“Public artistically” speaking I would like to mention two festivals in Poland: Traffic Design in Gdynia, small city in the north of Poland and Katowice Street Art Festival, in my opinion artistically a bit too “conceptual” but definitely interesting.

Please name an artist and his/ her mural in Lodz that you find particularly special.
It’s pretty hard for me to pick the one. Definitely the most prestigious one is the collaboration between Os Gemeos from Brazil and Aryz from Spain. They came to Lodz in 2012 and together painted a big piece next to Piotrkowska st. – the most important street in Lodz. Os Gemeos are like the Godfathers of modern day street art and muralism. They started on the streets of Sao Paolo in the middle of the 80’s. They are the inspiration for probably the majority of today’s “street artists” and for me personally it was the great honor to have the possibility to organize a wall for them. In Lodz they made the piece with Aryz, one of the best muralists in the world. 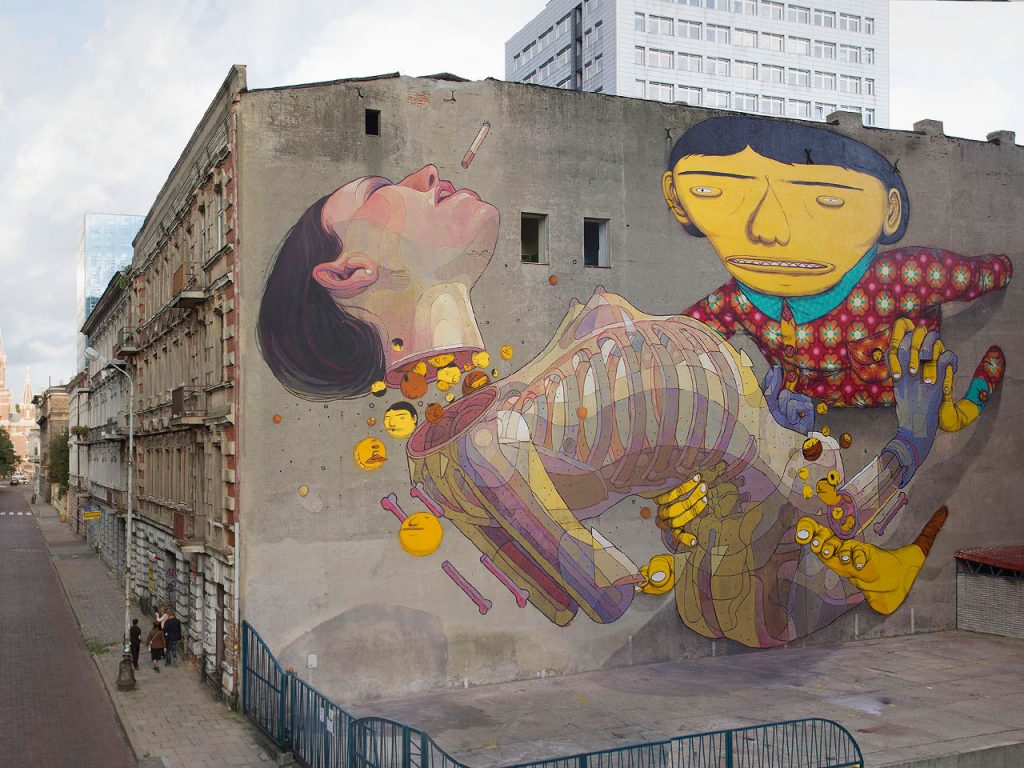 Apart from that, I guess that the “Deer” that Daleast from China painted in 2014 is amazing. In my opinion, it’s one of his best murals in his career. Every single time when I’m there I’m finding new details of that painting. Alexis Diaz from Puerto Rico is a unique artist. He is creating pieces with ink that he is putting on the surface of the wall with surprisingly thin brush. He came to Łódź in 2015 and made a piece titled “Sentir”. I’m really proud of the collaboration of five Polish artists in 2014 – Robert Proch, Chazme, Sepe, Proembrion, Cekas. They made one piece divided on the two 11 floors high walls. The diptych titled “Recycles”. Besides that….I had the honor to work with the truly masters: Vhils, Roa, Sat One, Remed, Inti, Etam Cru, M-City, Borondo, 3ttman, Morik… 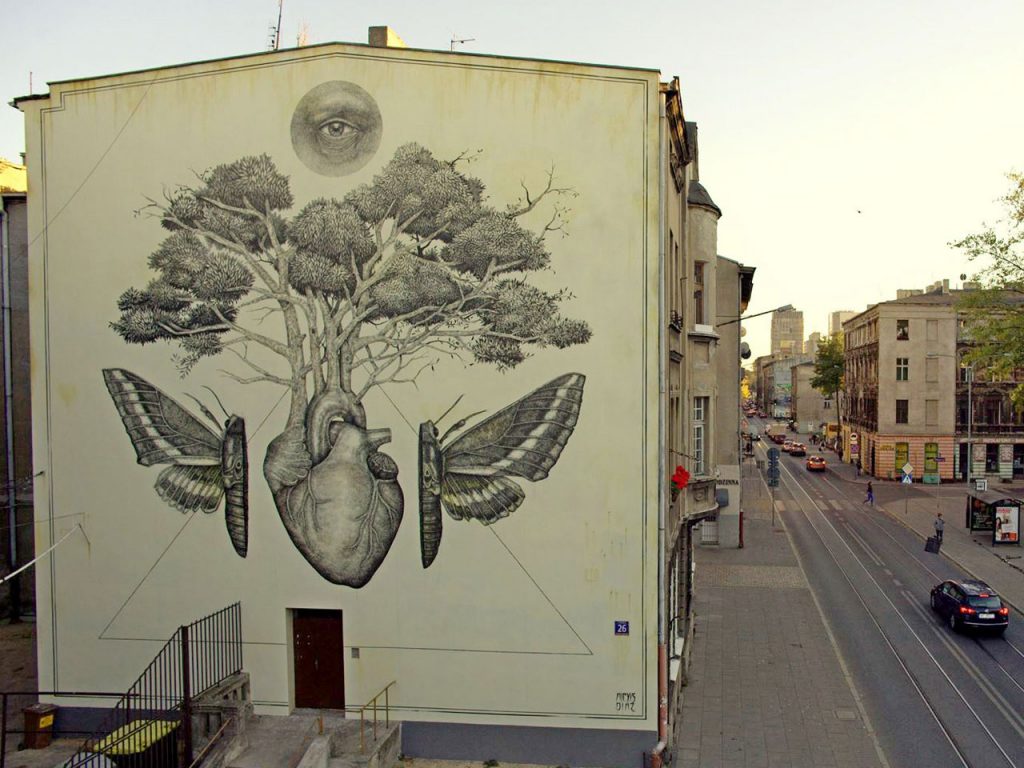 Please name the most difficult mural achieved so far.
I would say it was “Cisza/Silence” installation that we did in 2015. Łukasz Berger – Polish artist – fixed to the wall 1300 metal bars. Surprisingly, that part was kinda easy, but finding the perfect wall was much more difficult. Because the whole piece works with the sun beams, the wall had to be “southern”, so 75% of the walls were “cancelled” from the beginning. 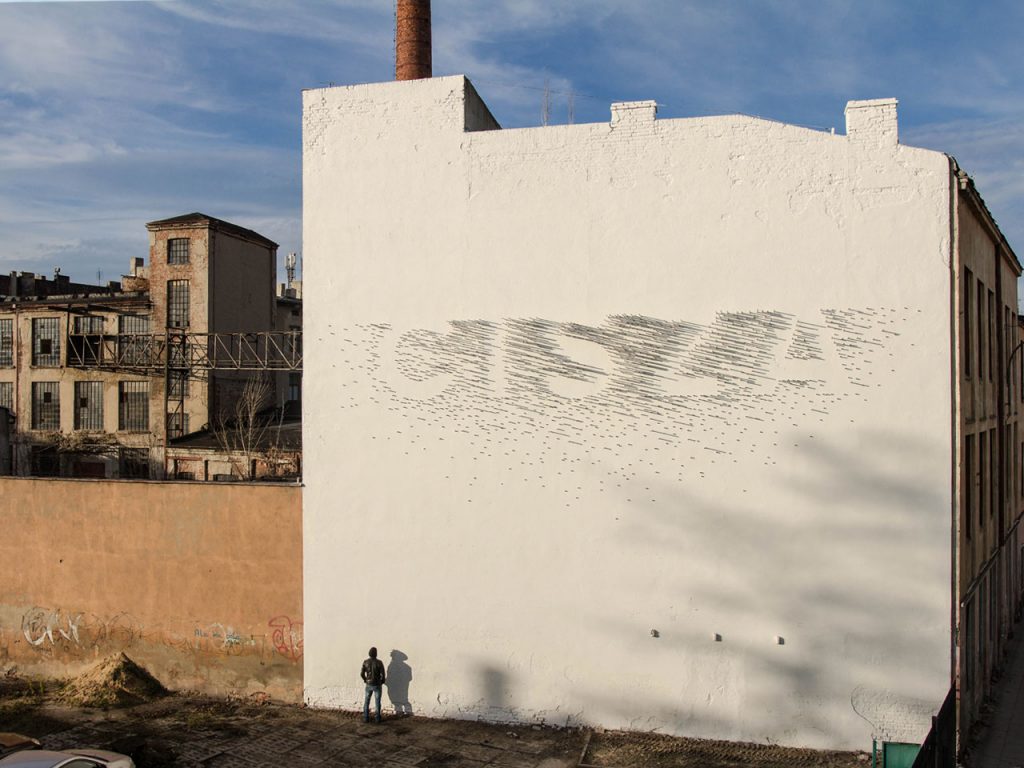 Because it’s “silence” the wall had to be perfectly flat, without any windows, balconies, destructions or anything attached to it. Because the sunbeams should cruise around the metal bars to create the shadows, it couldn’t be surrounded by high buildings. Also You should have the possibility to see the piece directly in front of the wall, not only from any specific angle. And the last – somebody had to give You the permission to fix 1300 metal bars (over than 500kg) directly to the wall. I found 4 walls in the city that qualified, but only for the one the owner agreed to the bars. 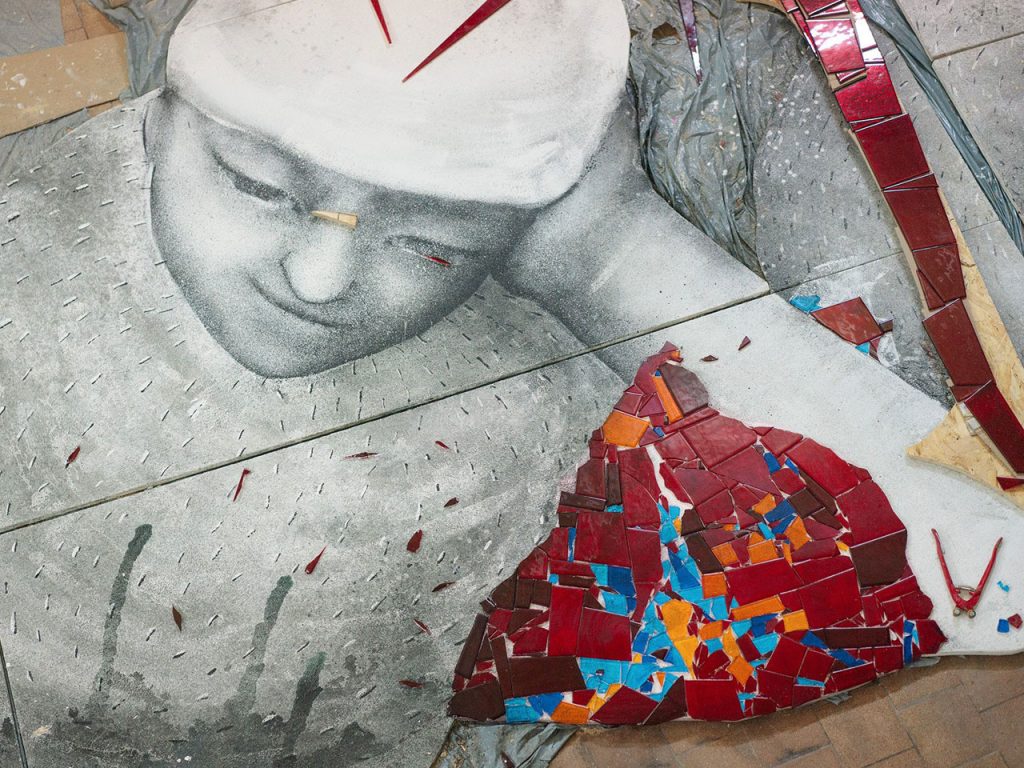 Speaking about a difficult wall, I would also say Mona Tusz’s piece. She made a relief with the elements of stained glass, metal and wood. Everything would be easy, but the wall had the heating on it’s surface and that shit much complicated the process of fixing particular parts to the wall. 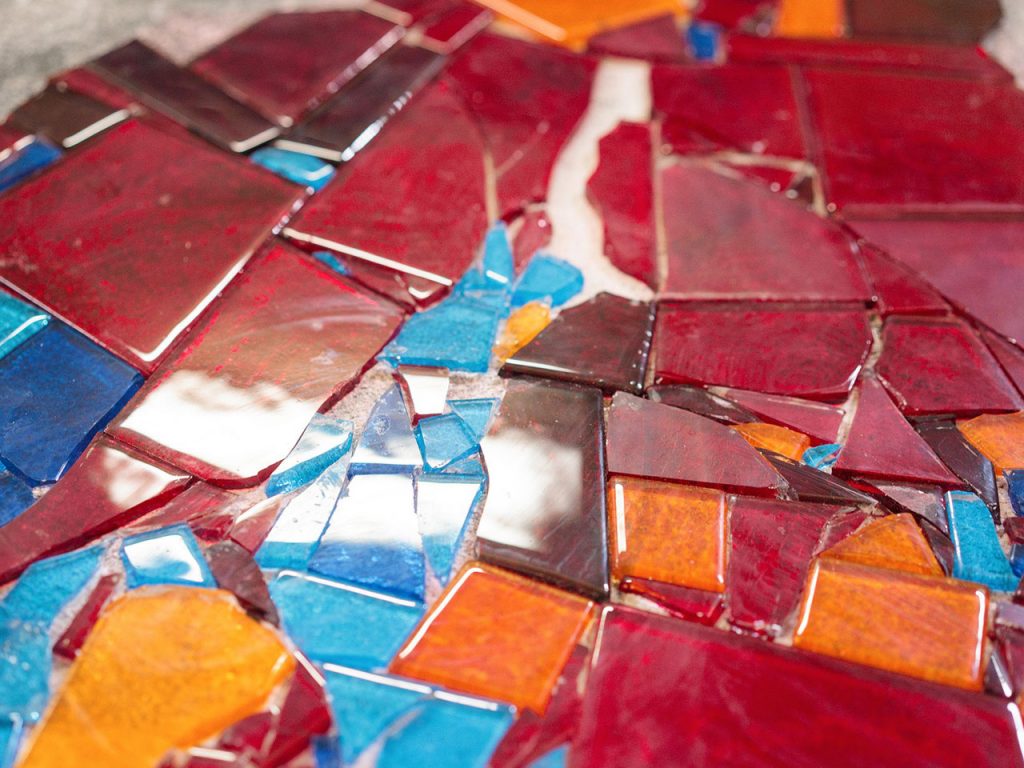 Which are the gallery’s plans for the future? Is there a special number of murals that the gallery aims to achieve? And is there anything else than murals that the gallery might focus, in the future?
After more than 7 years of the mural project in Łódź, after over than 50 murals with the artists from different parts of the world, I feel I can say the city centre has been adequately saturated with these works. I saw murals as the first, most logical and natural step towards thinking about a contemporary art gallery in Łódź’s urban spaces. The massed numbers of bare walls in the city centre virtually demanded to be filled with painting. The ideas has been put into practice, Łódz’s murals are famous all over the world and have become a major icon of the city. I wouldn’t like to cause a surfeit, though, a situation where numbers of the murals will be so high that the inhabitants will lose interest and the ir reception will become thoughtless.
That’s the reason why I started to work directly with the City and with Łódzkie Centrum Wydarzeń we started the UNIQA Art Łódź project to create various works of art – sculptures, bas-reliefs, installations, site-specific realisations. Diverse materials and technologies are employed to make the project as varied as possible. It is essential that residents be presented with the broadest possible range of graphic solutions, so that the project, beside the purely artistic format, is oferring the visual education. 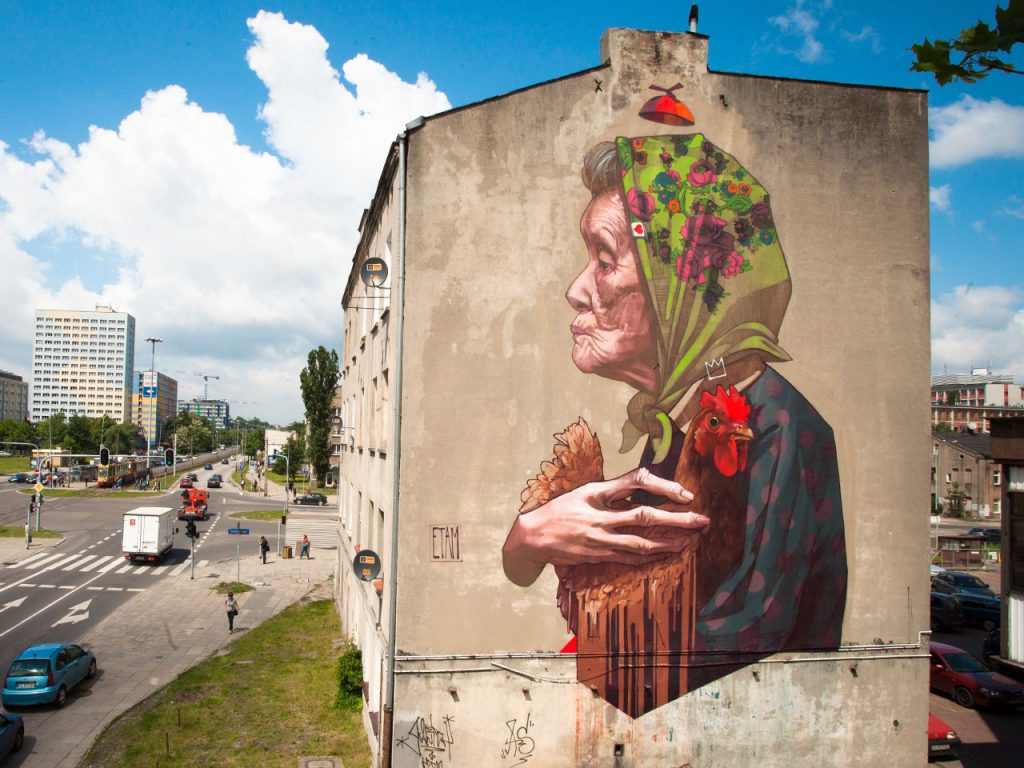 IGLOO is a white magazine focusing on contemporary spaces. What does ‘white’ inspires you?
Might be an artwork from the gallery, or any other artwork, or a movie, or a story, or a photo… for example the “white” simplicity of posters. Good, modern posters are simply emblematic and they are reconzignible “from the first sight”. 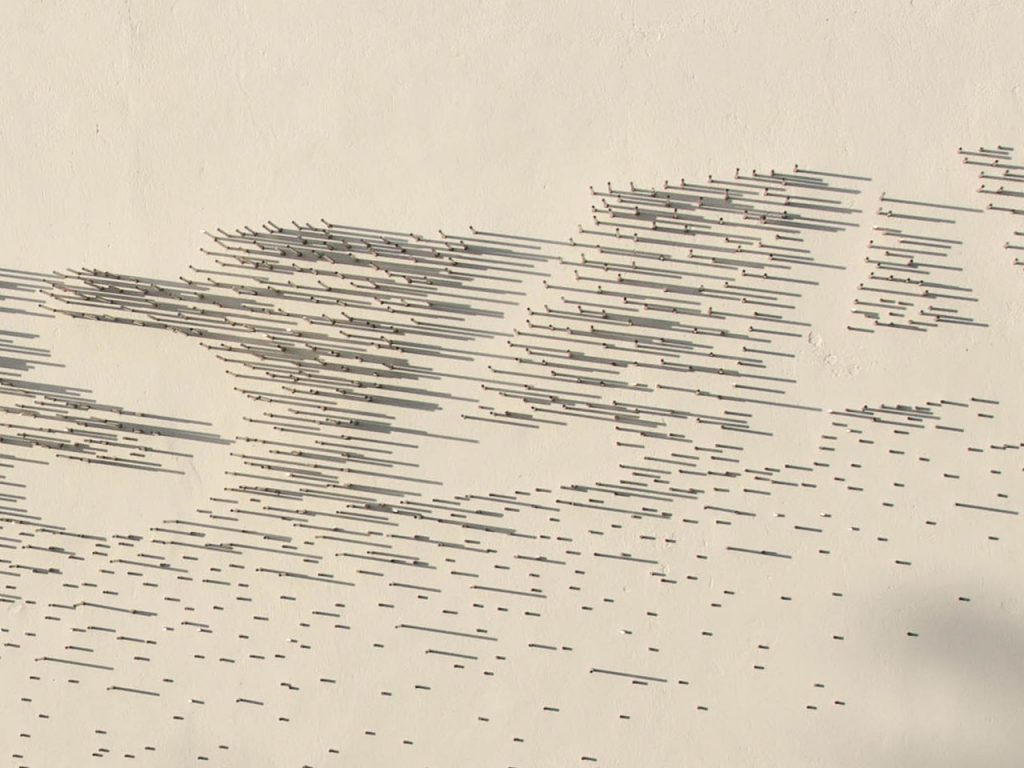