The first issue of the Bulletin of the National Commission of Historical Monuments, founded in 1908, is dedicated to the Comana Monastery, thus proving how much this monument was valued. The texts signed by Al. Lapedatu and Nicolae Ghika-Budești were generously illustrated with photographs and sketches signed by Gavril Popescu.

The first from a long line of rulers and boyars, churchwardens of Comana, was Vlad Țepeș. The only things left from that time are the archaeological imprint of the 1461 skete and the name of the Călugăreni estate that was gifted to it. The ruler that firmly inscribed his name in the history of the monastery was Radu Șerban (1601-1611). In 1588, he built a brick church, grouping around it the cells, priory, refectory and annexes, surrounded by strong walls, with watchtowers in the corners and provided with arrowslits all around, including the cells. These walls give the ensemble a mixed, defining character, as a monastery and a fortress. 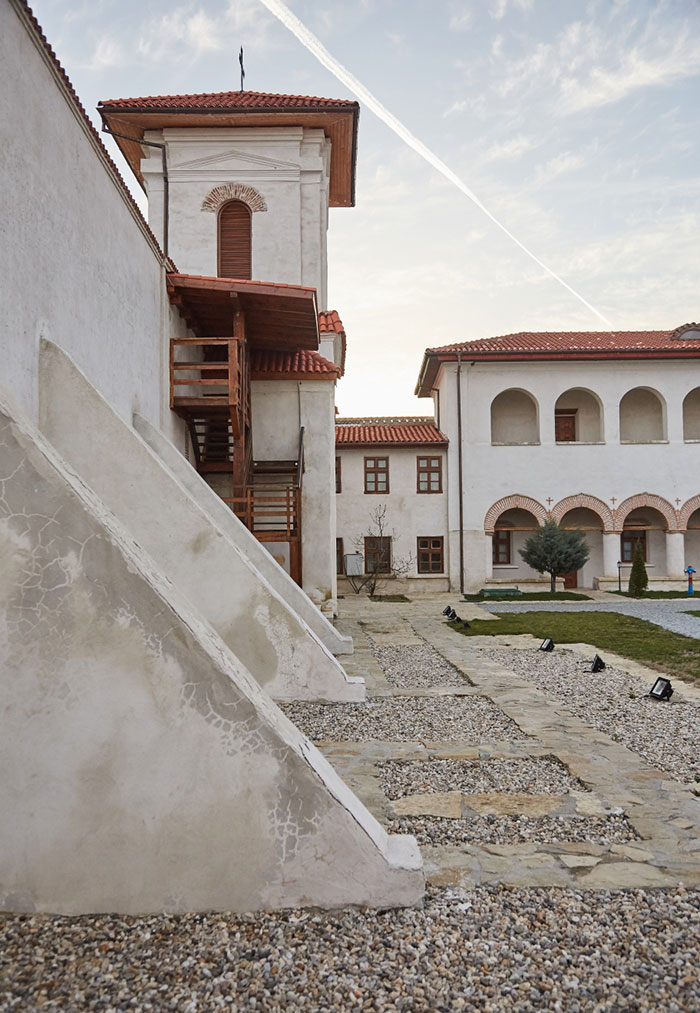 An important contribution, between 1699 and 1703 is owed to High Steward Șerban Cantacuzino, son of Drăghici and grandson of Radu Șerban. He adds a porch to the church, expands the priory and the cells and groups the tombs of his forebears – to which time will add others, including his. To him we also owe the architectural jewel of Comana – the exterior belfry. What makes it so special? Besides the svelte columns and discreet grace of the sculpted décor, it has an extraordinary positioning, as it is not located inside the premises, as in the case of Mogoșoaia, Potlogi or Hurez, but looking towards the open field, hemmed by the always changing (based on the season) image of the water mirror and rush-bed. 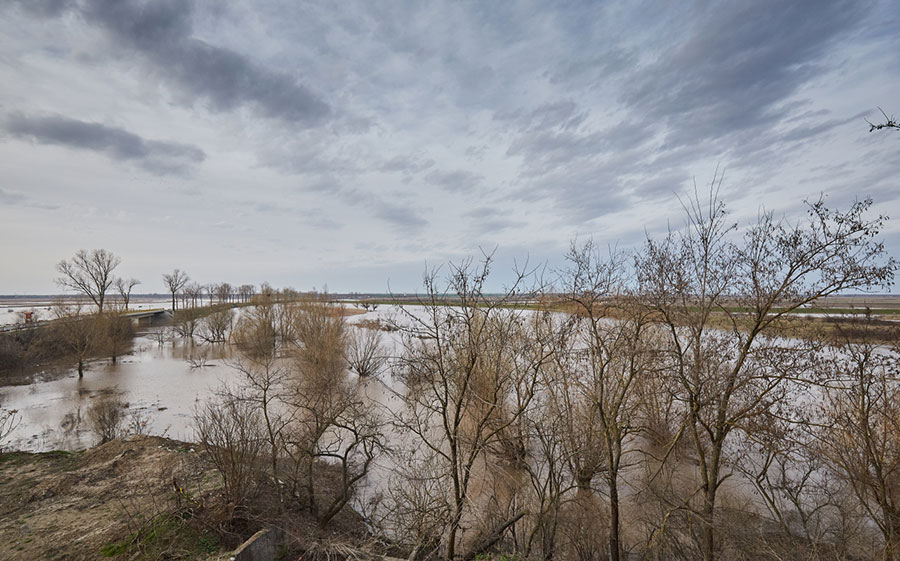 In the absence of direct heirs, in 1728 Nicolae-vodă Mavrocordat pledges the monastery to the Patriarchy of Jerusalem. The ignorance, lack of interest and greed of the Greek abbots who ran it laid waste to the treasures, books and incomes received from rulers such as Neagoe Basarab, Alexandru Iliaș, Matei Basarab, Șerban Cantacuzino, Constantin Brâncoveanu, Nicolae and Ion Mavrocordat, Grigore Ghica, Alexandru Moruzi and Constantin Ipsilanti, who, through generous gifts, inscribed their names on the list of churchwardens.

Superficial works and the demolition of several buildings, useless for a lessened community, mark a century of negligence ending in the ruin of the church. In 1847, architect Johann Schlatter proposes its rebuilding, which was completed in 1854. After the secularization, the kingly monastery becomes a rural parish, and its buildings will receive various destinations: headquarters of the prefecture of Vlașca County (1877), rural school (1889), bivouac and military cemetery (1916), housekeeping school (1925), film set (in 1965, for the film Tudor, when part of the West wing was destroyed), etc. 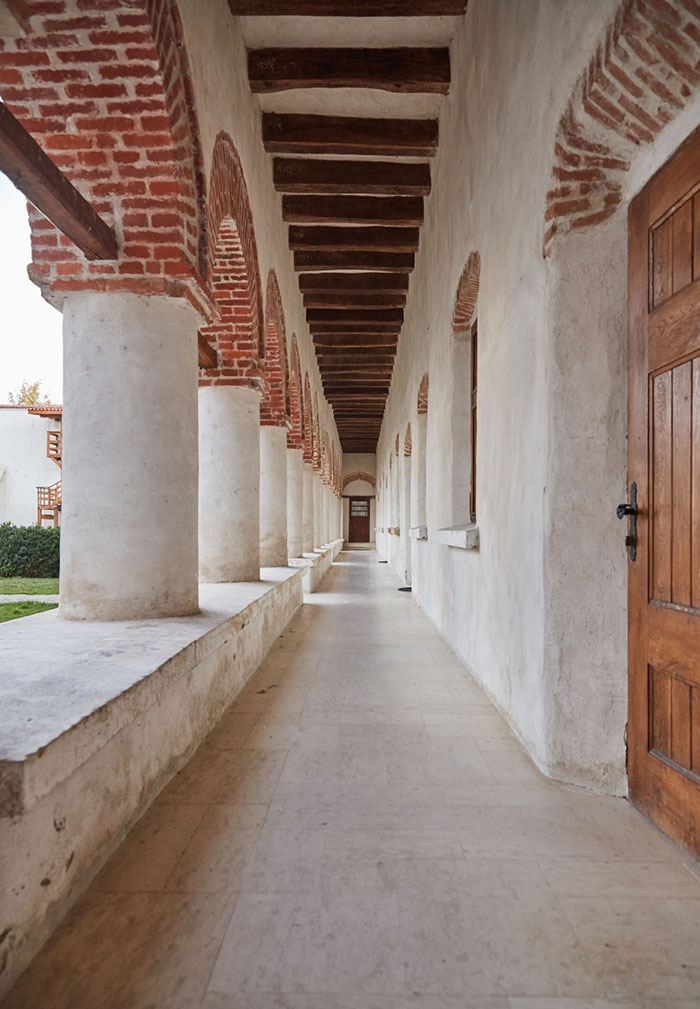 The year 1926 deserves a special mention. The cemetery built by the occupation troops was the final resting place of Romanian, German, Bulgarian and Turkish soldiers fallen in the battles of December 1916 on the Argeș-Neajlov front. The Tombs of the Fallen Heroes Society decides in 1923 to build, in place of the old church, a mausoleum, designed in 1926 by P. Demetrescu and completed in 1932 by V. Drăghiceanu and Horia Teodoru. The remains of over 750 victims from both sides are buried here, most of them unidentified.

Comana was returned to its original designation after more than a century, in 1991, when the Holy Synod emitted the decision of reinstating the monastery. Protected by waters and defended by walls, the Comana Monastery was only once, in 1769, a military theater of operations. It was much more damaged by the passage of time, by earthquakes and, especially, by the people that used it for other purposes. But it also benefited from numerous maintenance and restoration works, beginning in 1775 (Al. Ipsilanti) and 1814 (Ioan Caragea). It then was one of the first sites where the Commission of Historical Monuments carried out, between 1906 and 1907, an archaeological research, as well as rebuilding and consolidation works. 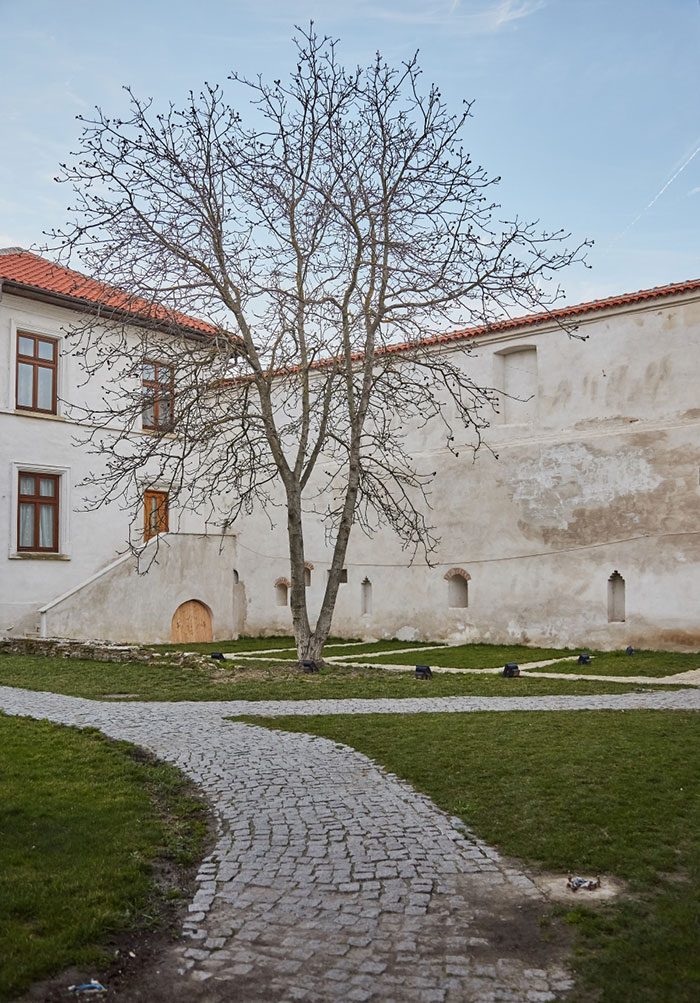 Several notable local people – a representative, a prefect, two magistrates and other thirty members – set up in 1924 the Association for the Restoration of the Comana Monastery and commission architect Cegăneanu with the project of a girls’ school, which becomes an urban housekeeping school in 1925, when the buildings are retroceded to the Ministry of Instruction. In 1935, after an evaluation by Arch. Sterie Becu, restoration works are carried out through the G. M. Ionescu enterprise. The next two years are marked by conflicts between the beneficiary and the contractor, mediated by the C.H.M., on the subject of payments, the final volume of works and the 8% deduction established at the auction.

The Regal Resident of the Region of Bucegi (an administrative formula from the time of the royal dictatorship) grants, in 1939, 45,000 lei for the walls, belfry and priory, and the C.H.M. appoints Arch. Emil Costescu to be in charge of the works. He will also oversee the consolidation works of 1942-1944, following the 1940 earthquake. The steel profiles and copper plate had to be approved by the Ministry of Army Provisions and Work Production. After the work, the housekeeping school turned gymnasium (grades V-X) was repaired in 1952 using money collected from the students’ parents.

In 1970, the Directorate of Historical Monuments initiated ample research and restoration works. The exemplary study signed by archaeologists Adrian and Lia Bătrâna identified the foundations of the buildings dating back to the time of Vlad Țepeș – a wooden church with a rectangular plan and a polygonal altar, a belfry and a volume containing cells – as well as the other building stages of the monastery. It was discovered that the church built by Radu Șerban was not fully replaced in 1854. The altar and nave were widened, the porch was rebuilt on the foundations from 1700, but the walls of the narthex were kept up to the vaults, a fact confirmed by the extraction from the wall of a small window, in the frame of which the old painting was preserved. 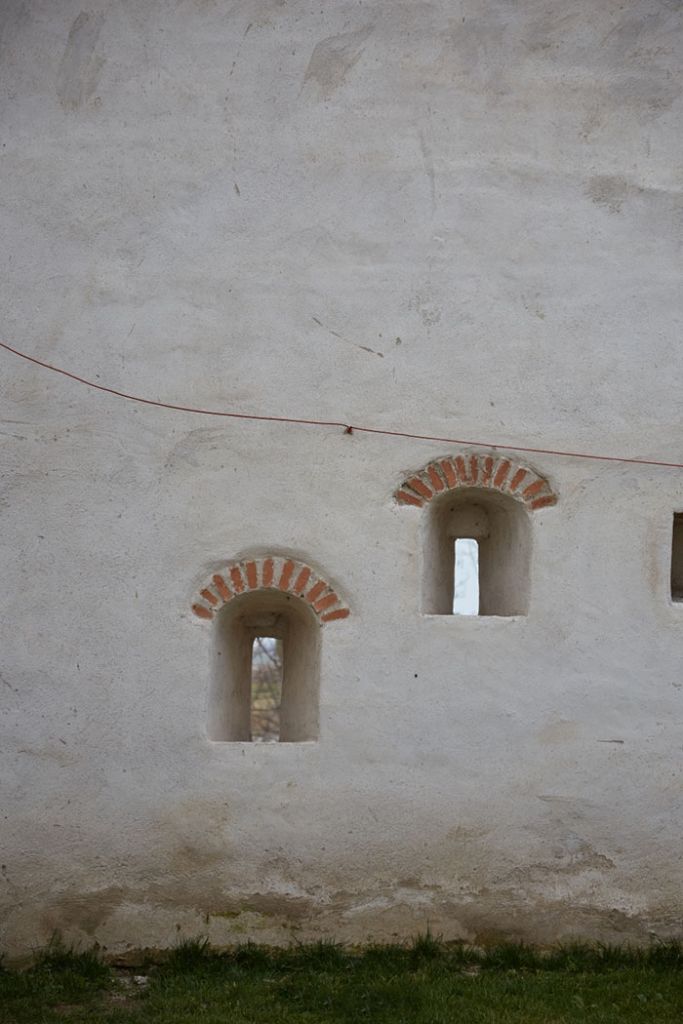 The project signed by Arch. Liana Bilciurescu concerned the rebuilding of the North-East tower, and the consolidation and restoration of all the components of the ensemble, a future creation center for the Union of Plastic Artists. An exhibition room, workshops and technical spaces were designed above the ruins found on the Southern and Northern sides. The heroes’ mausoleum was going to be masked by vegetation or rebuilt outside the premises. However, these final works were abandoned, as the project ceased abruptly in 1977 with the abusive dissolution of the D.H.M.

Weakened by the earthquakes of 1977 and 1986, the church was evaluated in 1980 by Prof. Alexandru Cișmigiu, and in 1987, the Technical Department of the Bucharest Archiepiscopacy (Arch. Voicu Florea, Eng. P. Rădășanu, Eng. B. Agapi) drew out a project that included a reinforced concrete structure included in the masonry, weaves and injections for the fissures, the consolidation and rebuilding of the nave spire  – works that were executed between 1988 and 1990.

The most recent works of restoration and development of the Comana Monastery cover almost a decade of perseverance from Reverend Father Dr. Mihail Muscariu and contributions from the civil and religious forums involved: the Episcopacy of Giurgiu, the County Council, the European Fund for Regional Development, the “Teohari Antonescu” County Museum. The inherent spaces of monastic life were redesigned: priory, cells, refectory and household annexes. The ensemble was rounded through the completion of the Southern wall and the building, towards the East, of a superposed wooden gallery that allows a view to the wall of the premises. 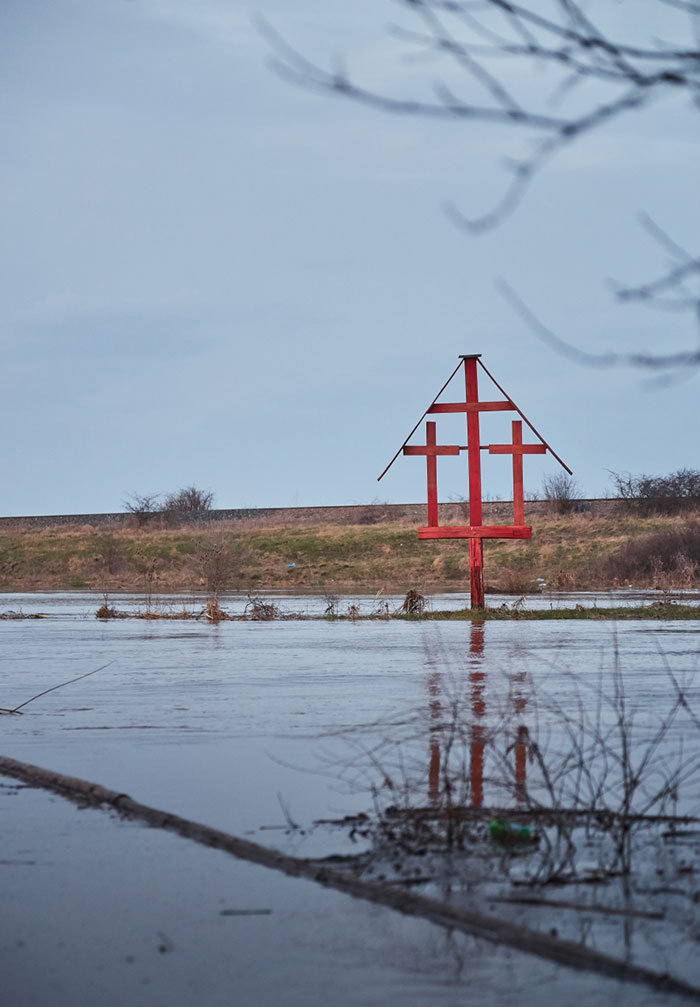 The museum with exhibits from the monastery patrimony, designed in 2008 and placed beneath the old vaults of the priory was moved to the new gallery and accredited as a branch of the county museum. Gravestones, church objects, armors and garments, agricultural and household tools, accompanied by meticulously documented texts and plans, tell the story of the monastery, the place and the people.

Planned by Radu Șerban with a double role – as place of worship and strategic refuge – Comana confirms its ambivalent vocation in the good tradition of Romanian monasteries, adding a cultural dimension to its religious mission.