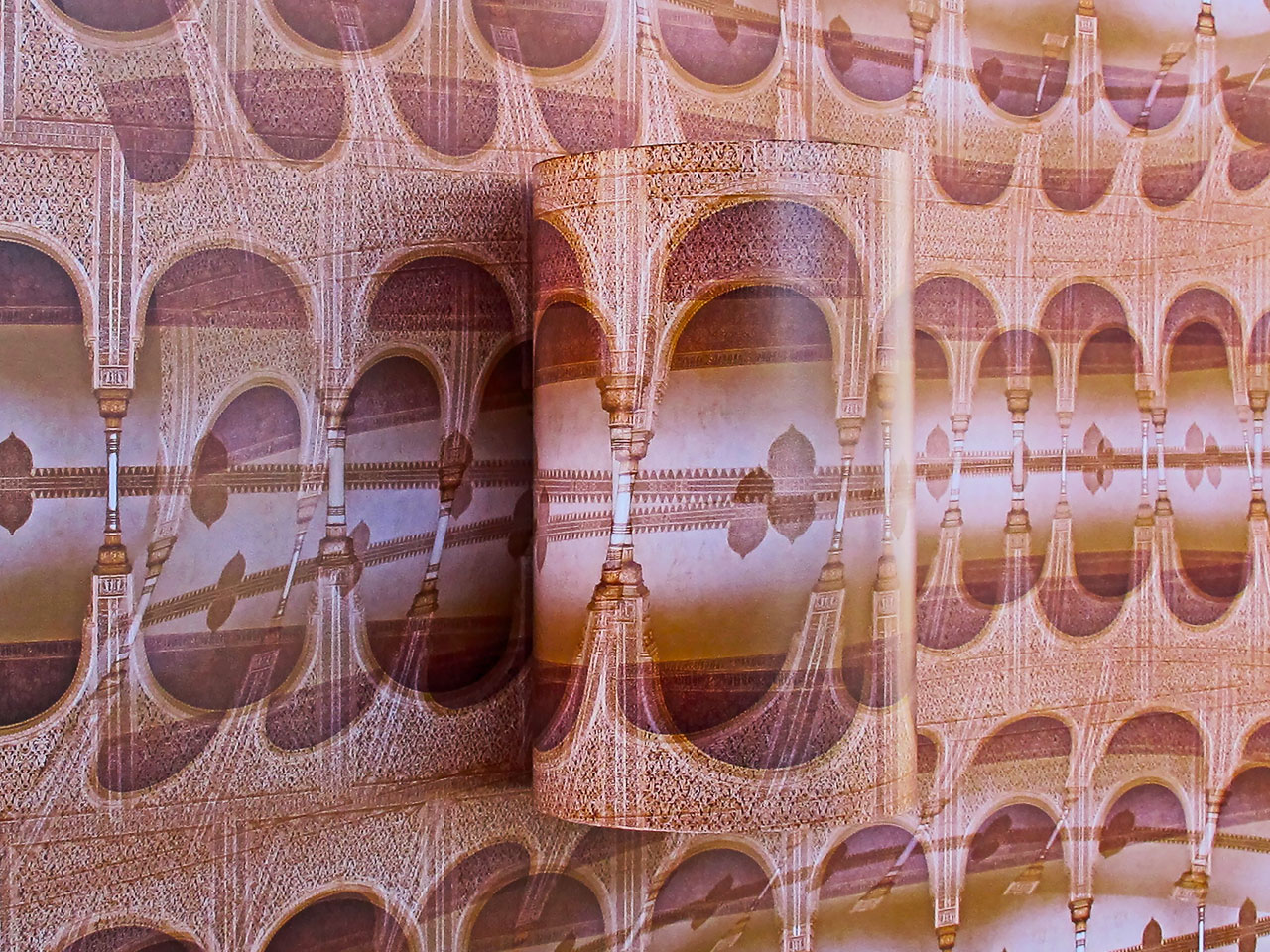 We are taking a tour inside the palace of Alhambra – inside an original, special vision of Alhambra, as reflected by Margarida Sardinha, who documented this amazing piece of architecture and, then, turned it into a completely new visual story. 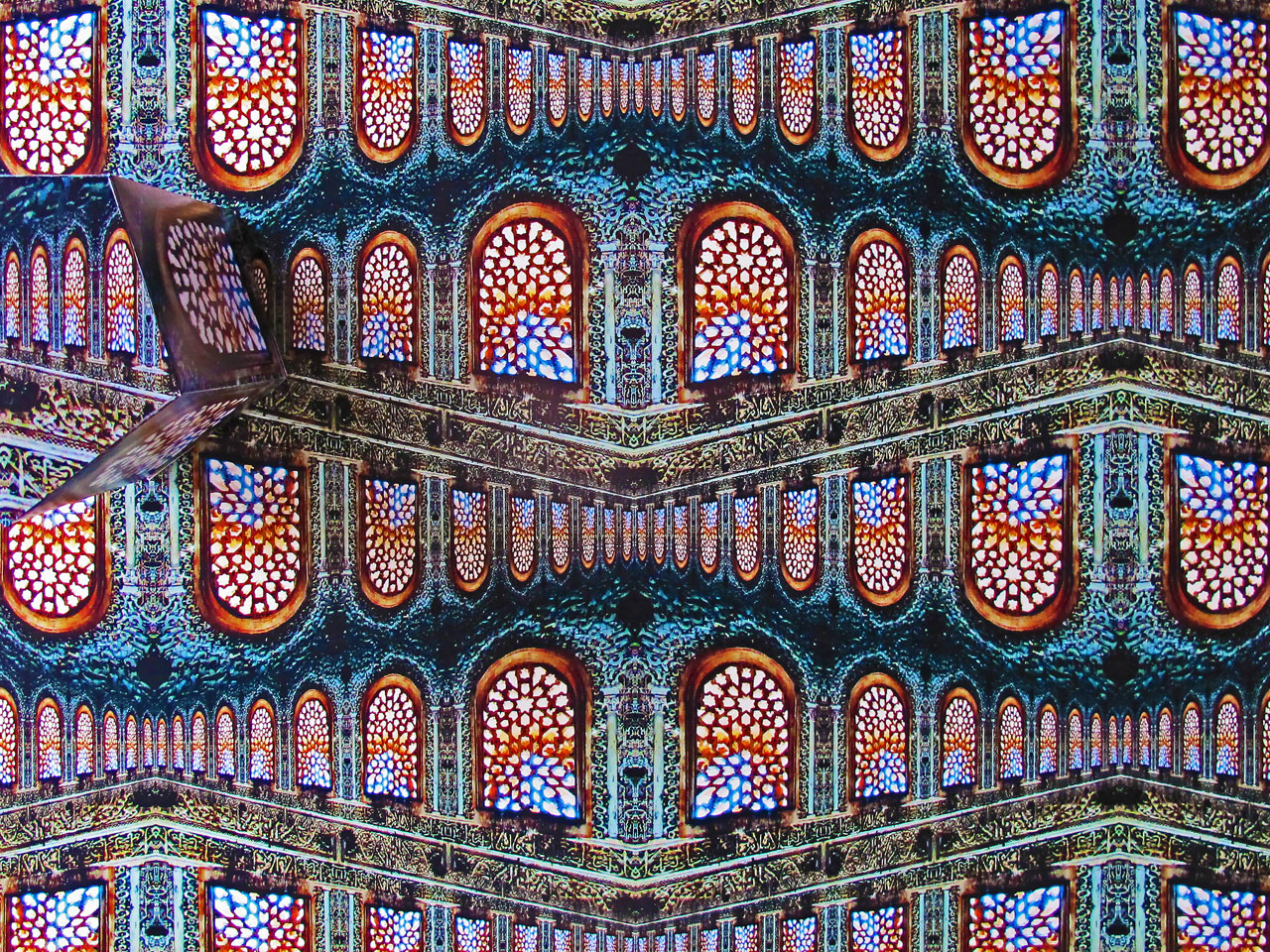 As we take a look at the compositions of this series, created in 2014 and entitled Symmetry’s Portal, we find ourselves in a kind of an Inception case, completely submerged into a subjective story and witnessing a different kind of architectural vision – that of the artist’s mind, reshaping the physical world of the palace, rebuilding various spaces and reassigning them with new dimensions.

The Symmetry’s Portal expands, geometrically, a wide photographic survey of the Alhambra palace in Granada, Spain, palace that represents one of the landmarks of Islamic pattern design in Europe, and the photographic assemblage is used by Margarida to address issues of symmetry and to generate illusory semblances.

„In symmetry, there are only 17 regular ways of dividing a two-dimensional plane into regular tessellations, and these can be all found in the floors, walls and ceilings of the Alhambra. It is extremely rare to find all these types of symmetries all in the same place – only some Egyptian temples also display such knowledge. When I went to the Alhambra I was on the lookout for these different types of symmetries and as I photographed the place I was able to find and understand them” the artist explains. 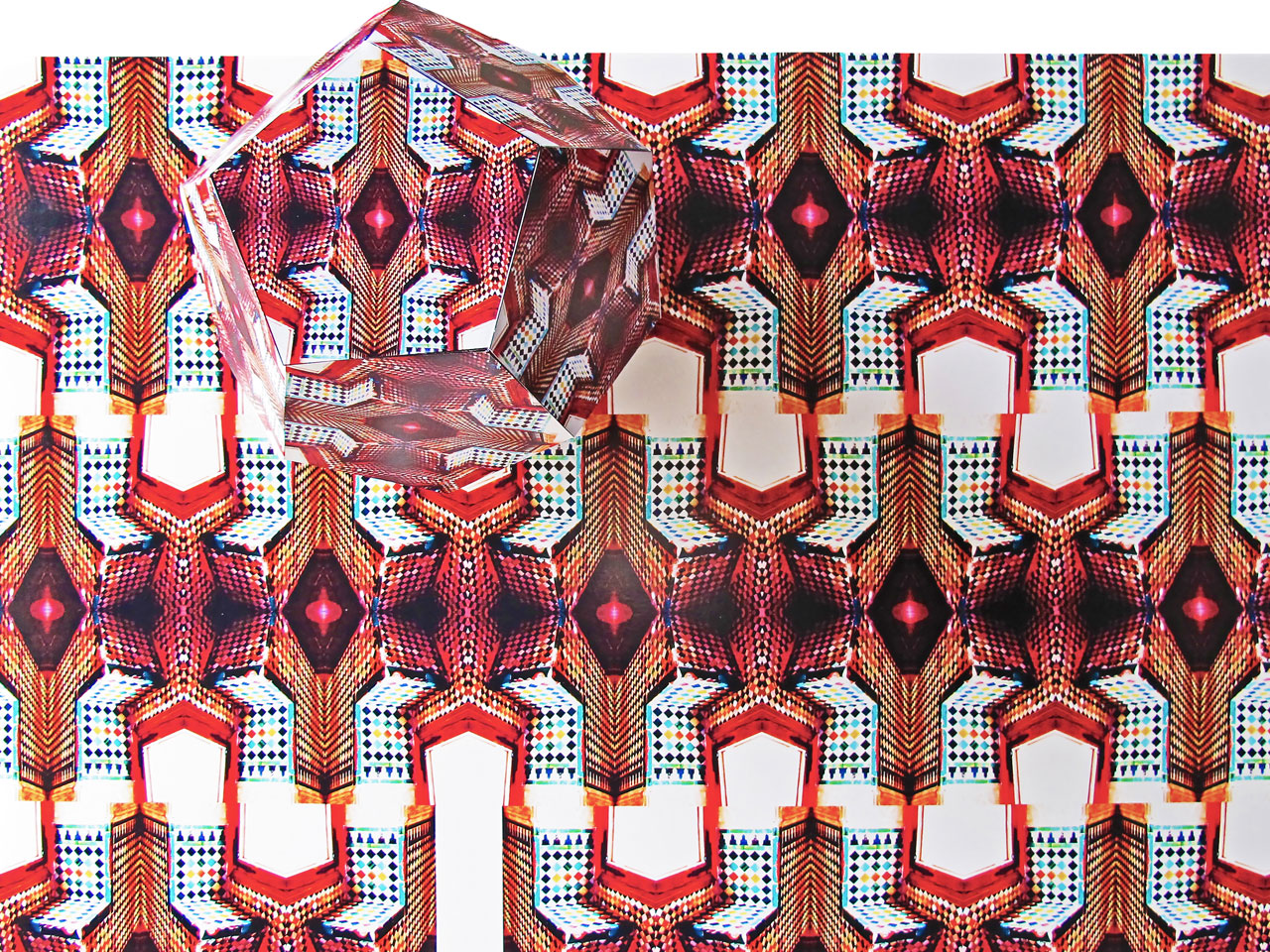 than that symmetry itself.”

And so, this series of large scale prints has got its own game of lights, given by a certain sense of dynamics that is present in all the works included, as well as by a detail – a shape that completes the two-dimensional image, as there’s always either a cylinder or a pyramid or a polyhedron on the generous surface of each print, taking the patterned story into three-dimensionality.

The series comprises 30 works, each of 150x94x35 cm, and an experimental 3D movie of 25 minutes that were, all, produced at the artist’s studio. The backgrounds of the 30 works are printed on vinyl; the polyhedral shapes attached to them are printed on photographic paper and then assembled by Margarida and, then, each ensemble is enclosed in a plexiglas box. 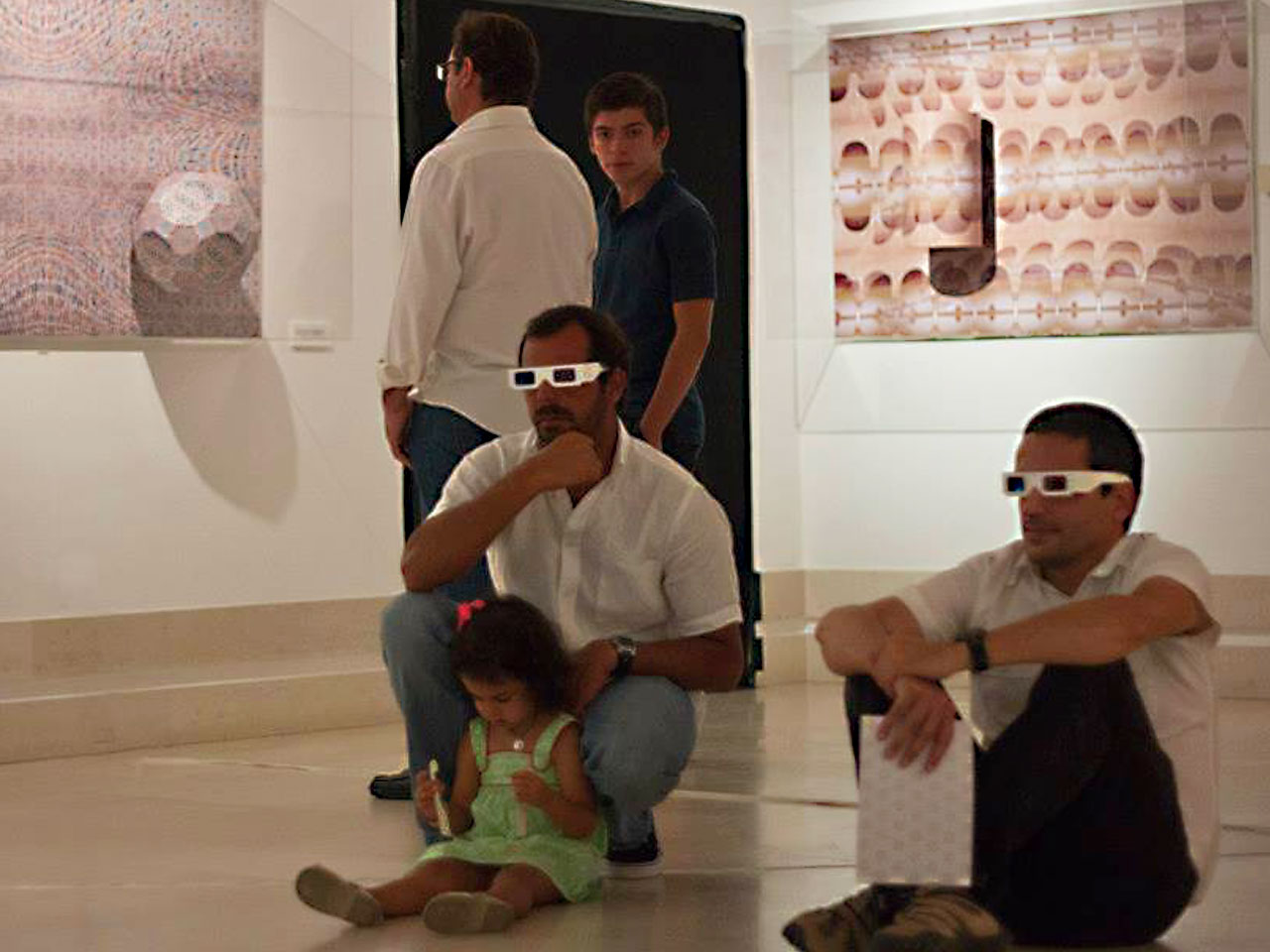 “The Symmetry’s Portal is a body of work of optical illusions, where the symmetric and random are diluted into three-dimensional works originated from two-dimensional planes, Margarida adds. Hence, symmetry’s isometric is deconstructed or complemented by three-dimensional polyhedra where the image’s similitude evokes various illusory spatiotemporal dimensions.” 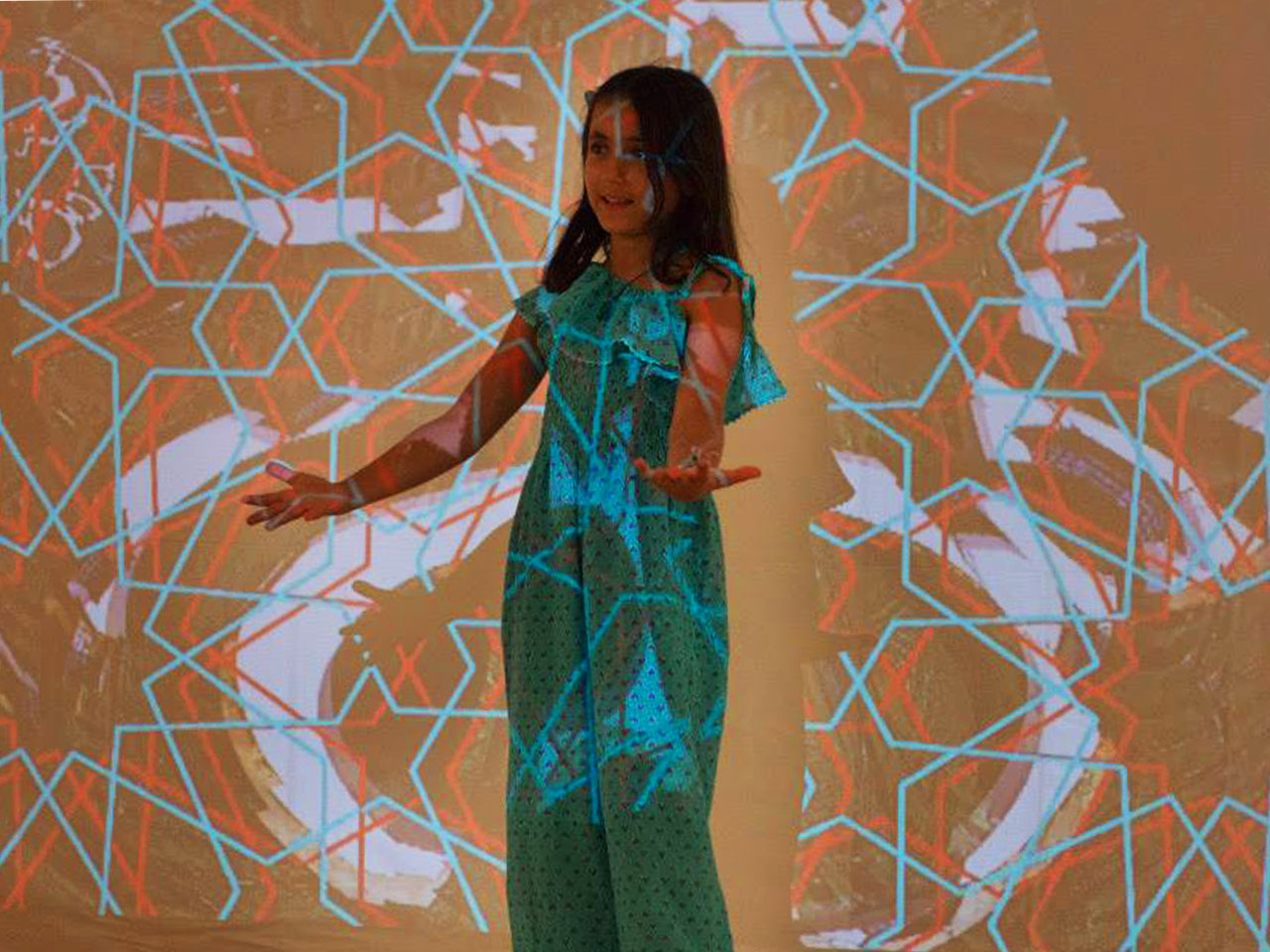 „Where the cancelling-out of the respective mind effected differentiations results in a non-polarised symbolic continuum. This symbolic continuum is not static for it is a flux of consciousness that albeit relative to each individual it is absolute in essence – a paradox in itself that implies the self – referential framework of the individual and his/hers correlation with absolute or innate forms. Thus, they refer to individual spatiotemporal events in the fabric of nature where immanence and transcendence are undifferentiated.”

All the thirty works and the film Symmetry’s Portal, that form the exhibition, were devised based on the geometric-mathematical descriptions of Keith Critchlow and Marcus du Sautoy (1) where the study of Islamic patterns is analysed via metaphysical and cosmological principles.

“Islamic spirituality had to develop a sacred art in accordance with its own form and revealed message and also its essence, says Margarida Sardinha. The doctrine of unity, which is central to the Islamic revelation coinciding with a nomadic spirituality that Islam made its own, has brought to light an aniconic art where the spiritual world is not reflected in the sensible world through various iconic images, but through geometry and rhythm, arabesques and calligraphy that directly reflect the celestial worlds and, finally, the supernal sun of Divine Unity. 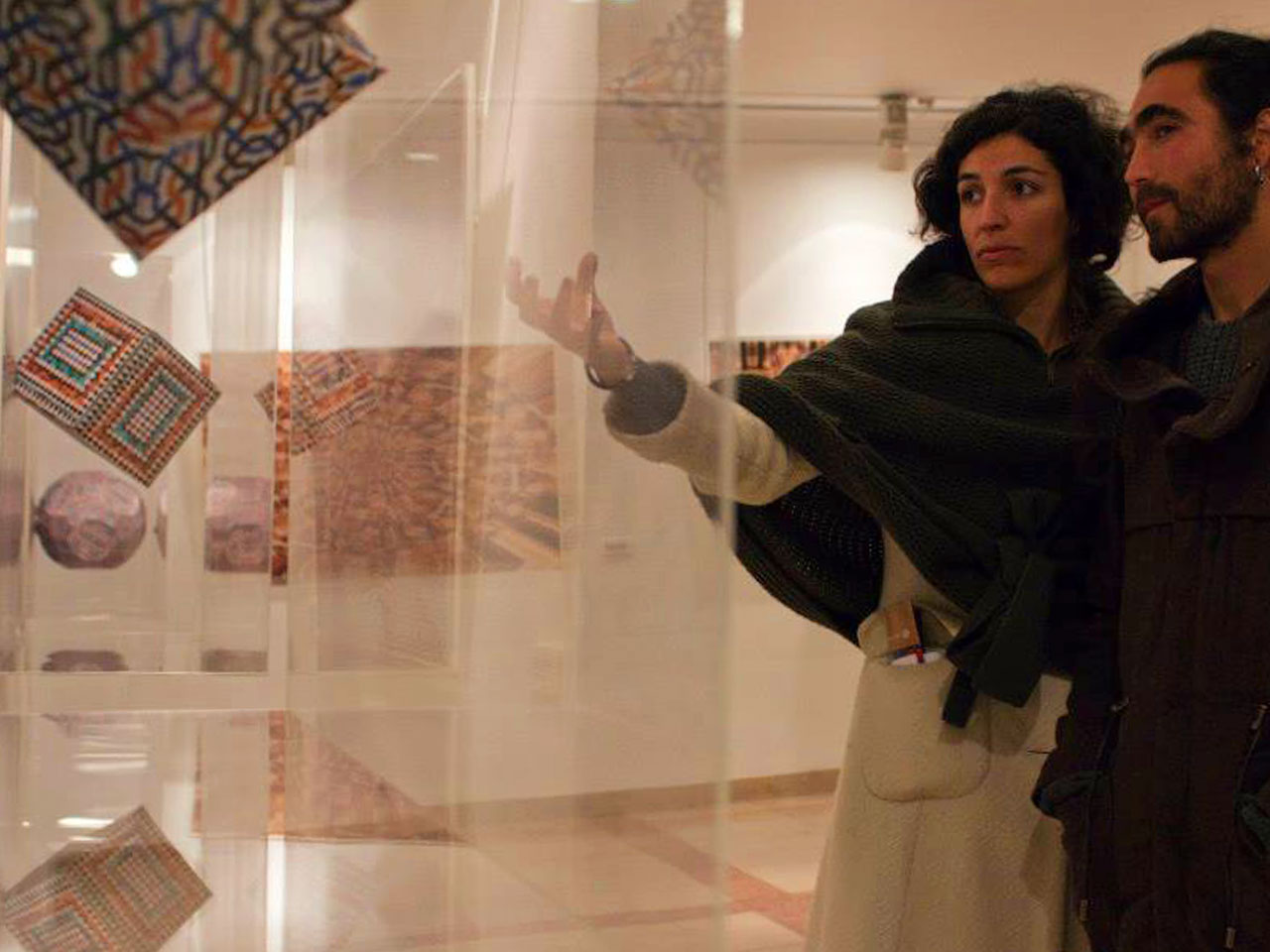 Basically, geometric patterns make up one of the three nonfigurative types of decoration in Islamic art, besides calligraphy and vegetal patterns.

These abstract designs not only adorn the surfaces of monumental Islamic architecture but also function as the major decorative element on a vast array of objects of all types. Islamic artists appropriated key elements from the classical tradition, then complicated and elaborated upon them in order to invent a new form of decoration that stressed the importance of unity and order.

The significant intellectual contributions of Islamic mathematicians, astronomers, and scientists were essential to the creation of this unique new style. 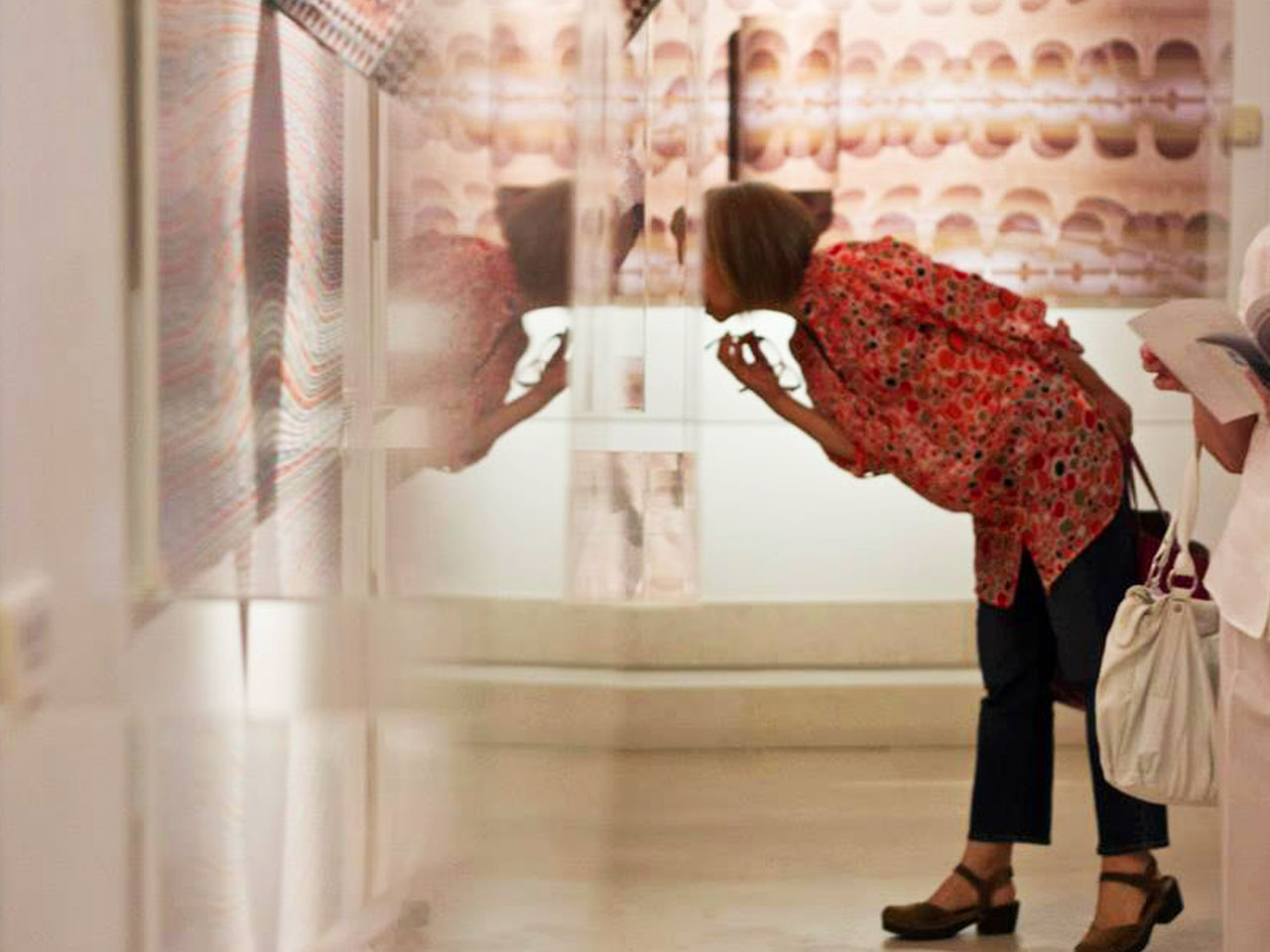 Consisting of, or generated from, such simple forms as the circle and the square, the designs may be overlapped and interlaced, as can arabesques (with which they are often combined), to form intricate and complex patterns, including a wide variety of tessellations, thus becoming one of the most distinguishing features of Islamic art. 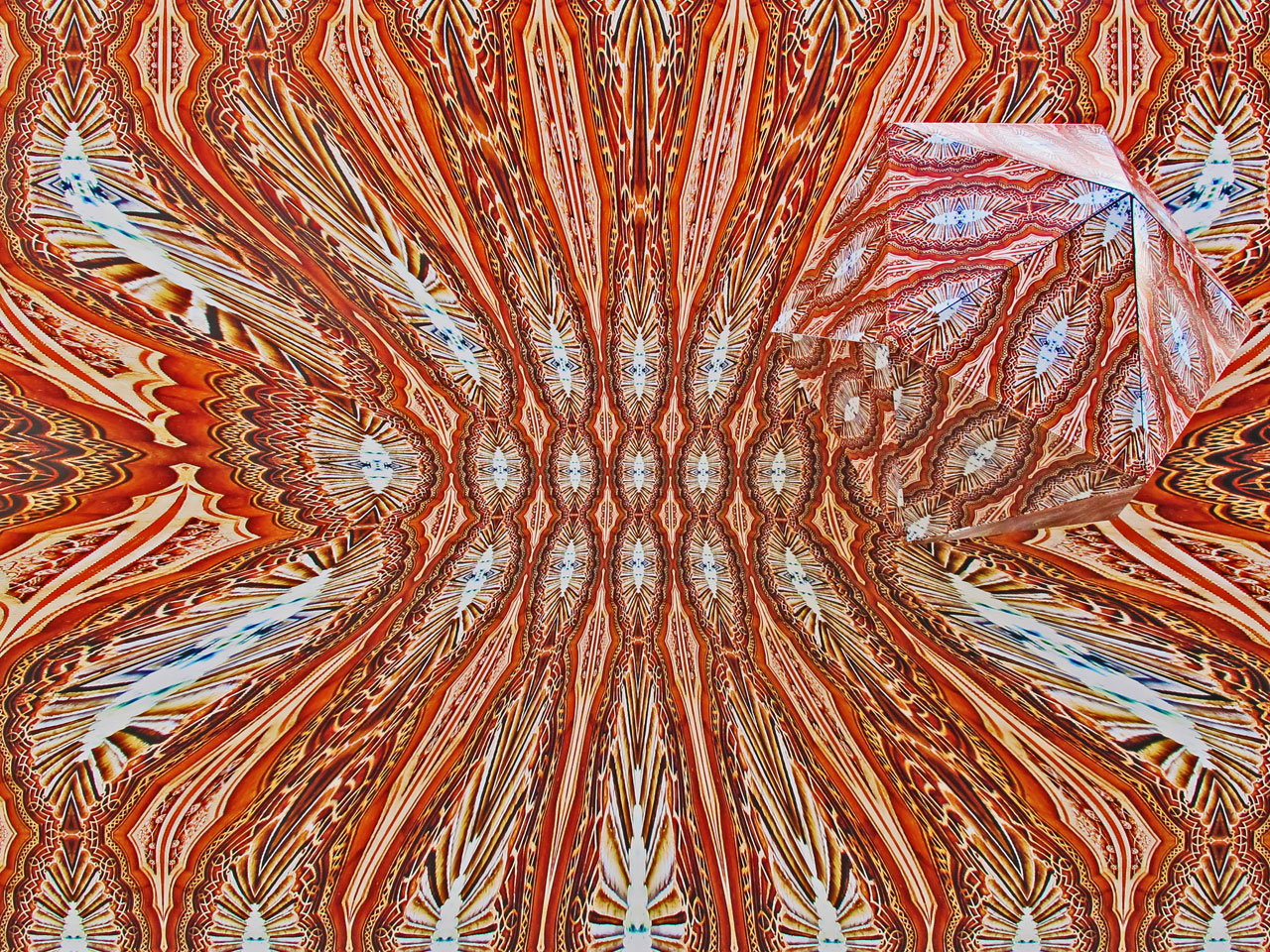 However, these complex patterns seem to embody a refusal to adhere strictly to the rules of geometry. These may constitute the entire decoration, may form a framework for floral or calligraphic embellishments, or may retreat into the background around other motifs.

The complexity and variety of patterns used evolved from simple stars and lozenges in the ninth century, through a variety of 6- to 13-point patterns by the 13th century, and finally to include also 14- and 16-point stars in the sixteenth century. 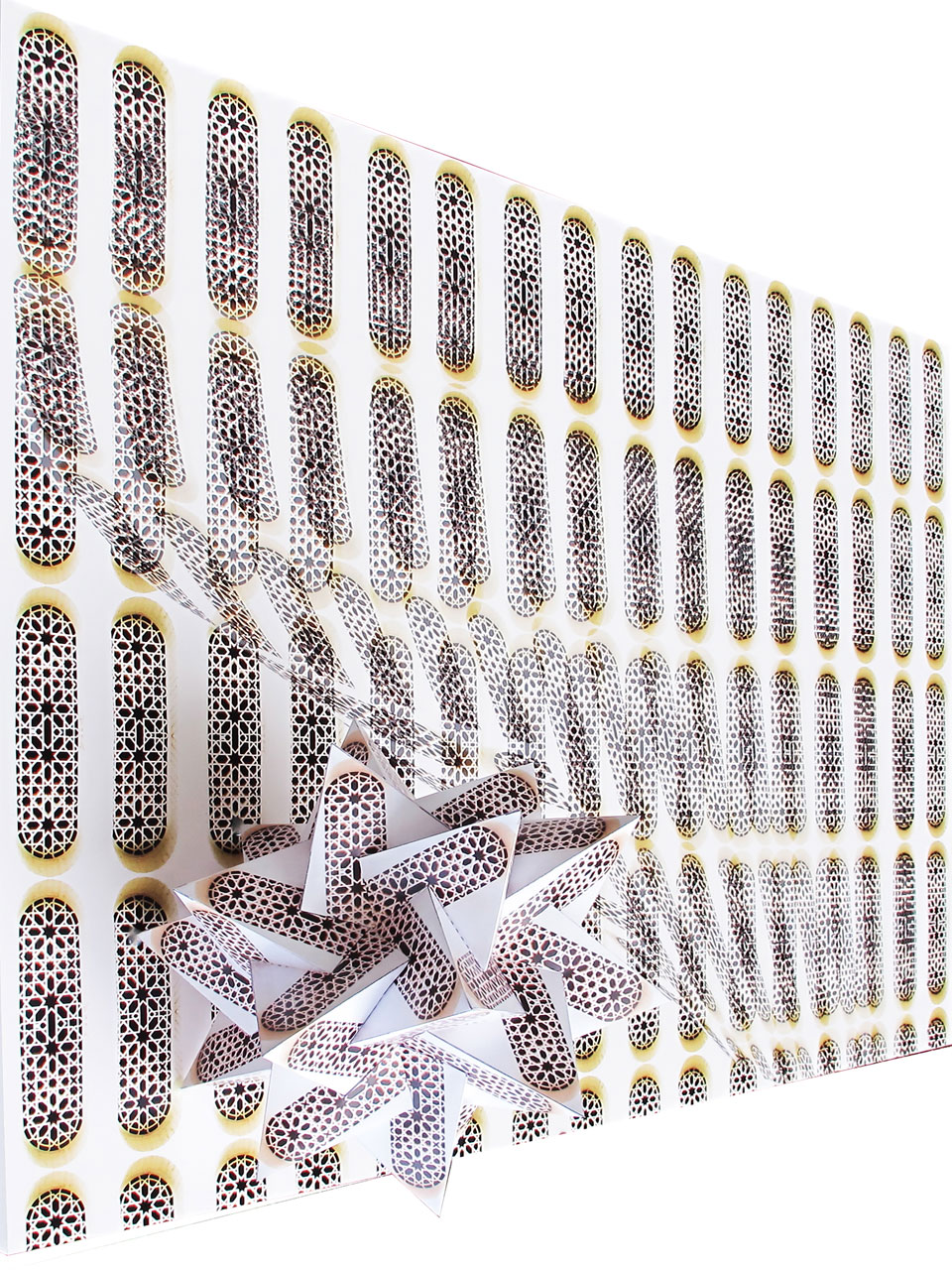 „There is within the Islamic spiritual universe a dimension that can be called Abrahamic Pythagoreanism, or the prospect of seeing numbers and figures as keys to the structure of the cosmos and as symbols of the archetypal world, and also in how the world is conceived as the God’s creation in the sense of Abrahamic monotheisms” Margarida explains. 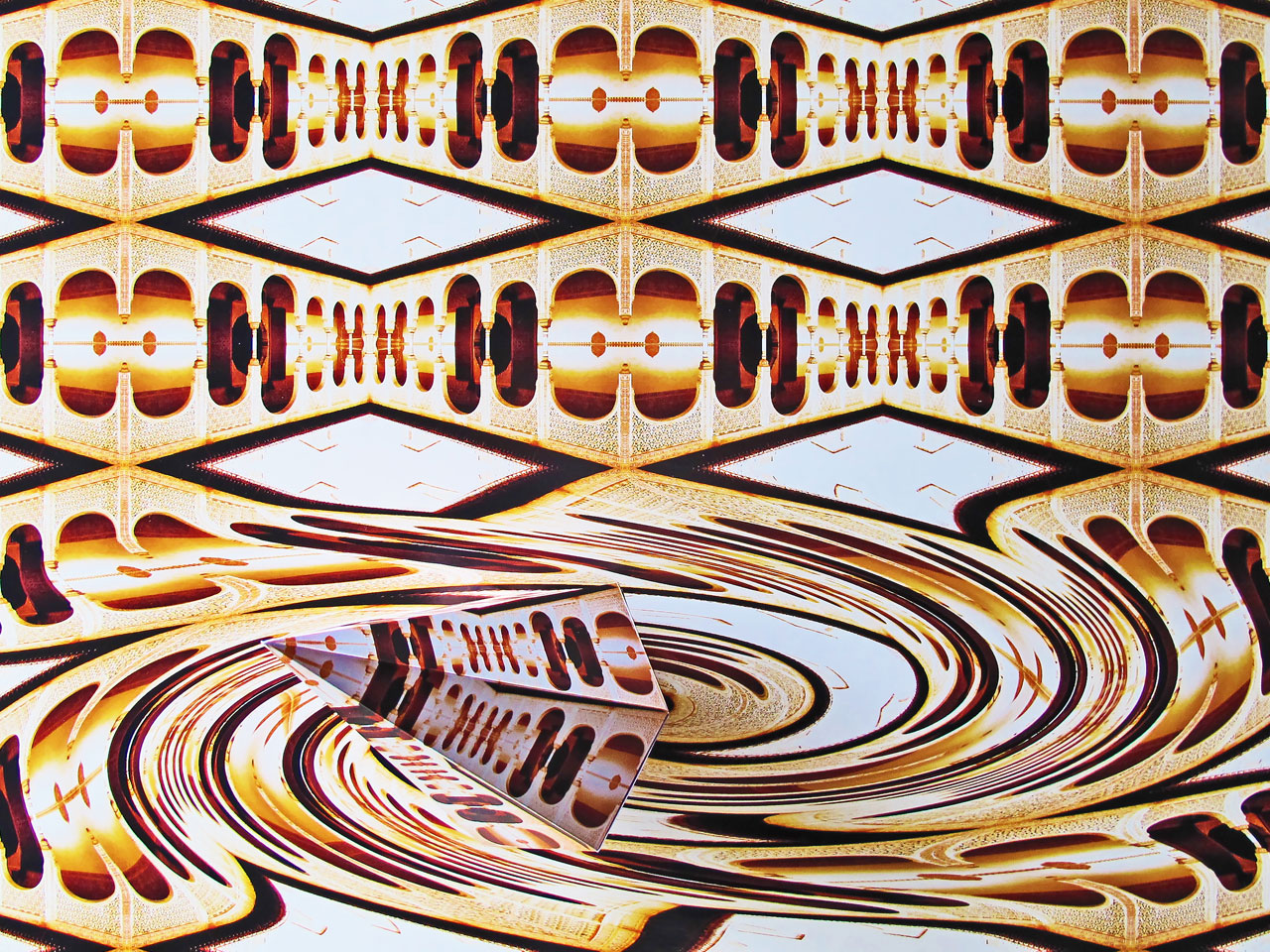 It is this possibility within the Islamic intellectual universe, with none or very little outside influences, that allowed Islam to develop a similar mathematical philosophy to the Platonic-Pythagorean tradition of antiquity but with a totally sacred characteristic.

<<Know oh brother … the study of sensible geometry evokes skill in all practical arts, while the study of intelligible geometry evokes skill in the intellectual arts because this science is one of the portals through which we move towards the knowledge of the essence of the soul, and this is the root of all knowledge…>> – Rasa’il Brotherhood of Purity, translated by S.H. Nasr. 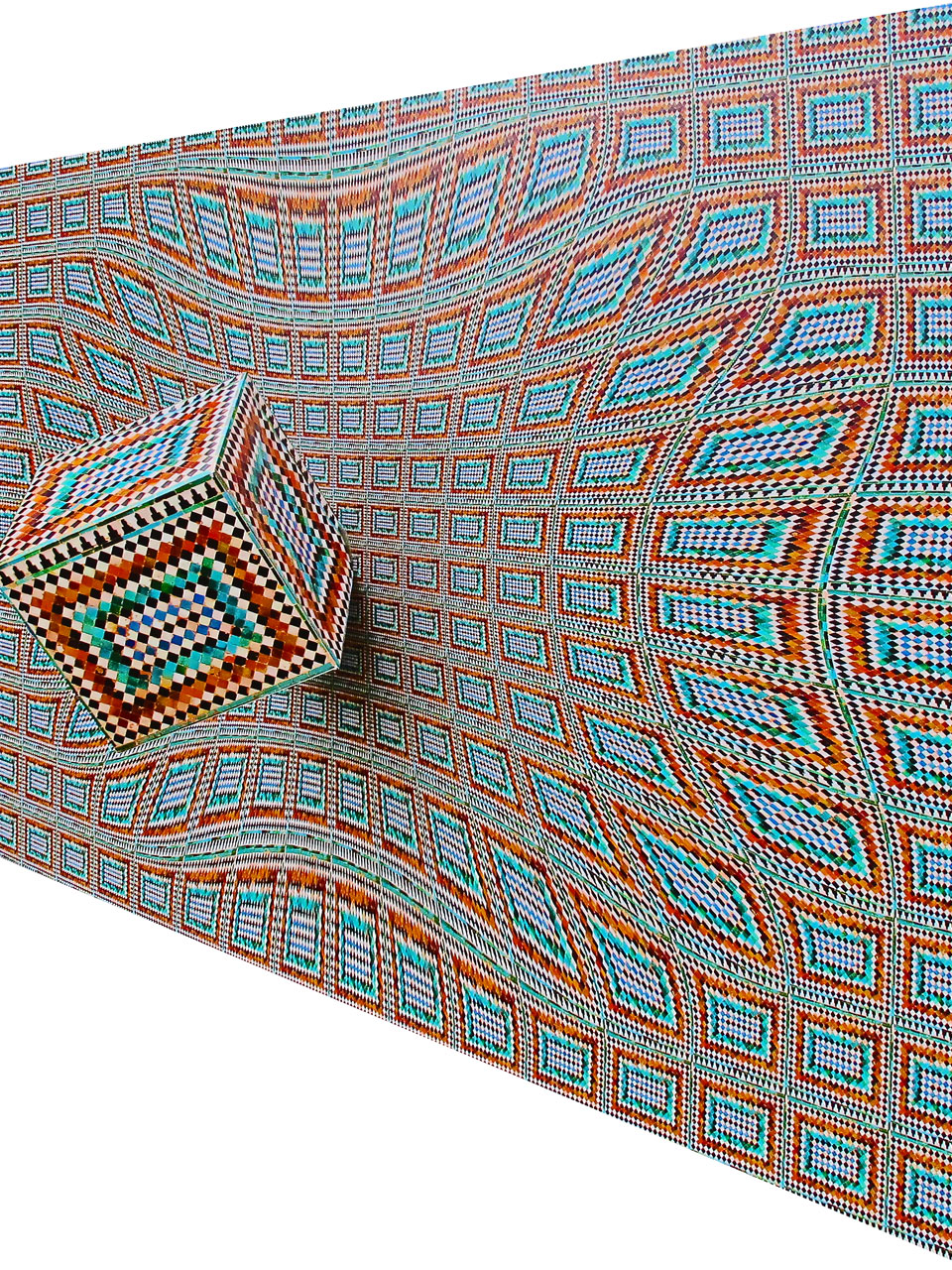 It is also this innate element of Islam’s structure that allowed the creation of a sacred art of an essentially geometric nature, and natural sciences that sought to penetrate into the very structure of physical existence, not by penetrating through the molecule and the atom, but by ascending to the world of mathematical archetypes to uncover the key structures that are reflected in the heart of matter.

Islamic art is essentially a way to ennoble geometrically matter united by calligraphic forms that incorporate the word of God as revealed in the book, the Holy Qur’an.” 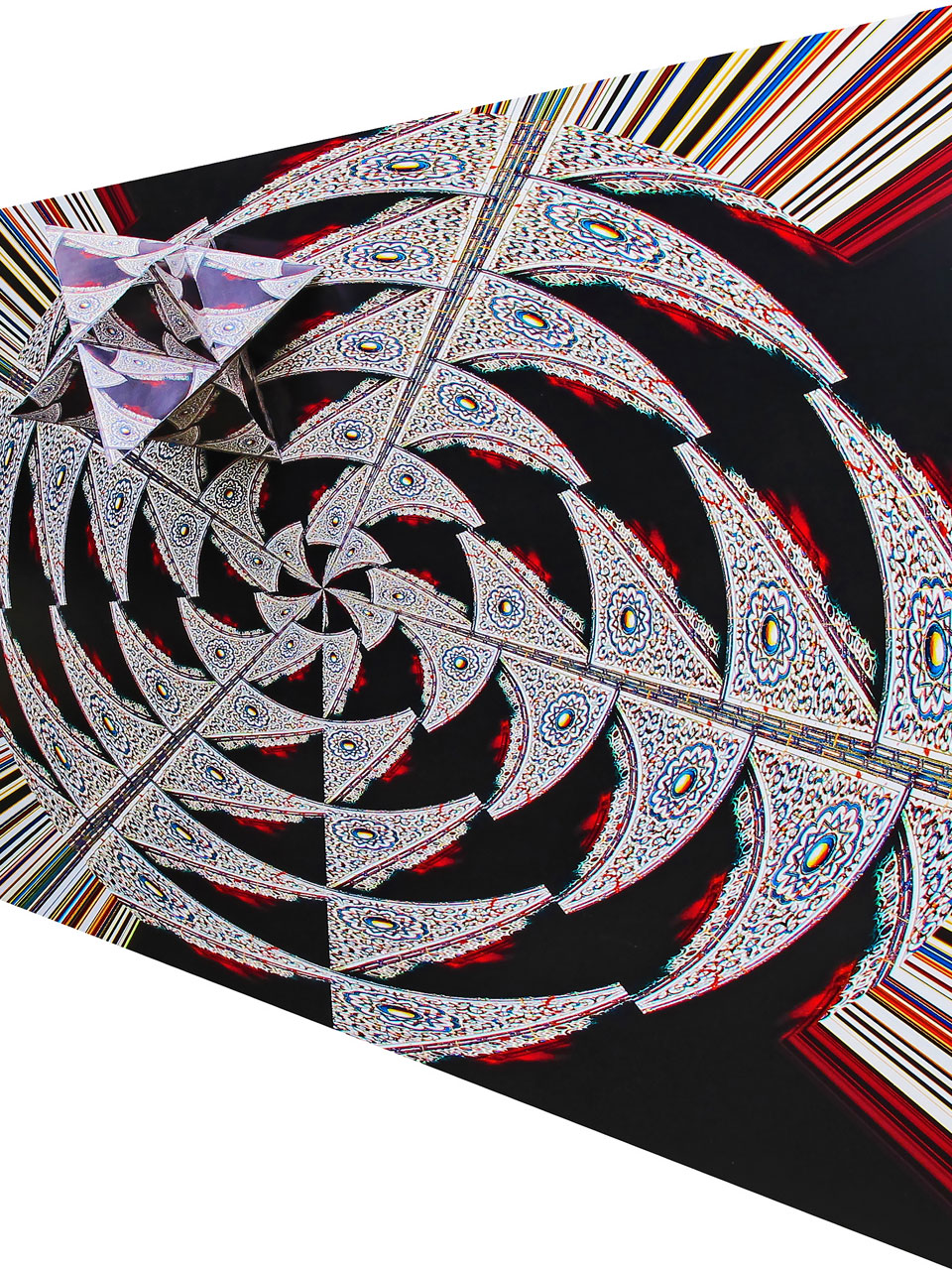 It might be in these statements that we find why this particular, geometrical approach seems so actual, even if designed several hundreds of years ago, as these forms are, themselves, „the bridge linking the periphery to the centre, the relative to the Absolute, the finite to the infinite, from multiplicity to unity”.

Symmetry’s Portal was presented as solo exhibition at the Aga Khan Foundation’s Ismaili Centre, in Lisbon, and at the Ericeira Cultural Centre, Portugal.

Limited editions based on the show were later exhibited at London’s Opera Gallery in November 2015 as part of the Reflections group exhibition curated by Neil McConnon. Eight of the print works, as well as the film Symmetry’s Portal, were also exhibited until the 1st of July, 2016, at the Carousel Gallery in London. Also, Helder Alfaiate art gallery of Ericeira hosts some of her works. 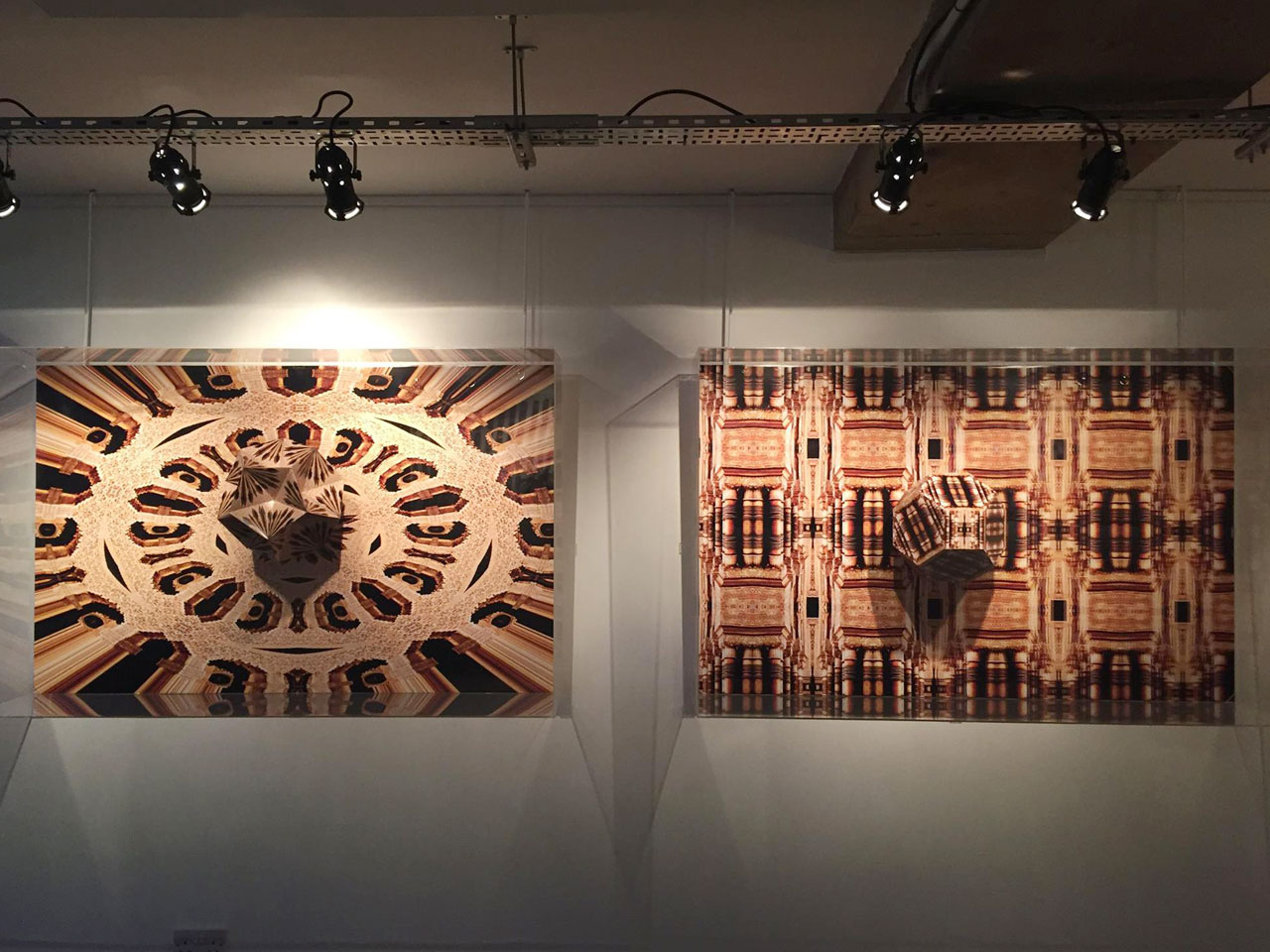 Short Profile of the Artist

Margarida Sardinha is an independent artist & director born in Lisbon in 1978, who studied, lived and worked in London for ten years. She attended Fine Art Combined Media studies at Central Saint Martins College of Art and at Chelsea College of Art and Design.

Margarida Sardinha is the director of several experimental films, such as Hyperbolic Hyparxis (2015), Master Mercy Matrix (2013), London Memory multi+city (2013) and HyperLightness ad absurdum (2011), all of them winners of several awards of various international film festivals.

Margarida was also one of the founders of the London based group pARTart and the curator of the group’s exhibition London Recycled at the Menier Chocolate Factory comprising 22 new works by the London based artists from ten diverse artistic discipline’s backgrounds and eleven different nationalities exploring London’s multiculturalism and multidisciplinary pluralism; through the show and its collateral promotional and fundraising events where she performed Vj-ing at several London’s East End venues along with the performances of invited emerging music bands and other members of the group live pieces, she created over one year the necessary conditions for these artists to produce new work re-accessing their respective individual cyclic experience of London’s living making it a collective mirror of the city arts scenery.

She won the Prize of Jovens Criadores (Young Creators Prize) awarded by the Portuguese Cultural Ministry and the Grupo Artes e Ideias in 1999. 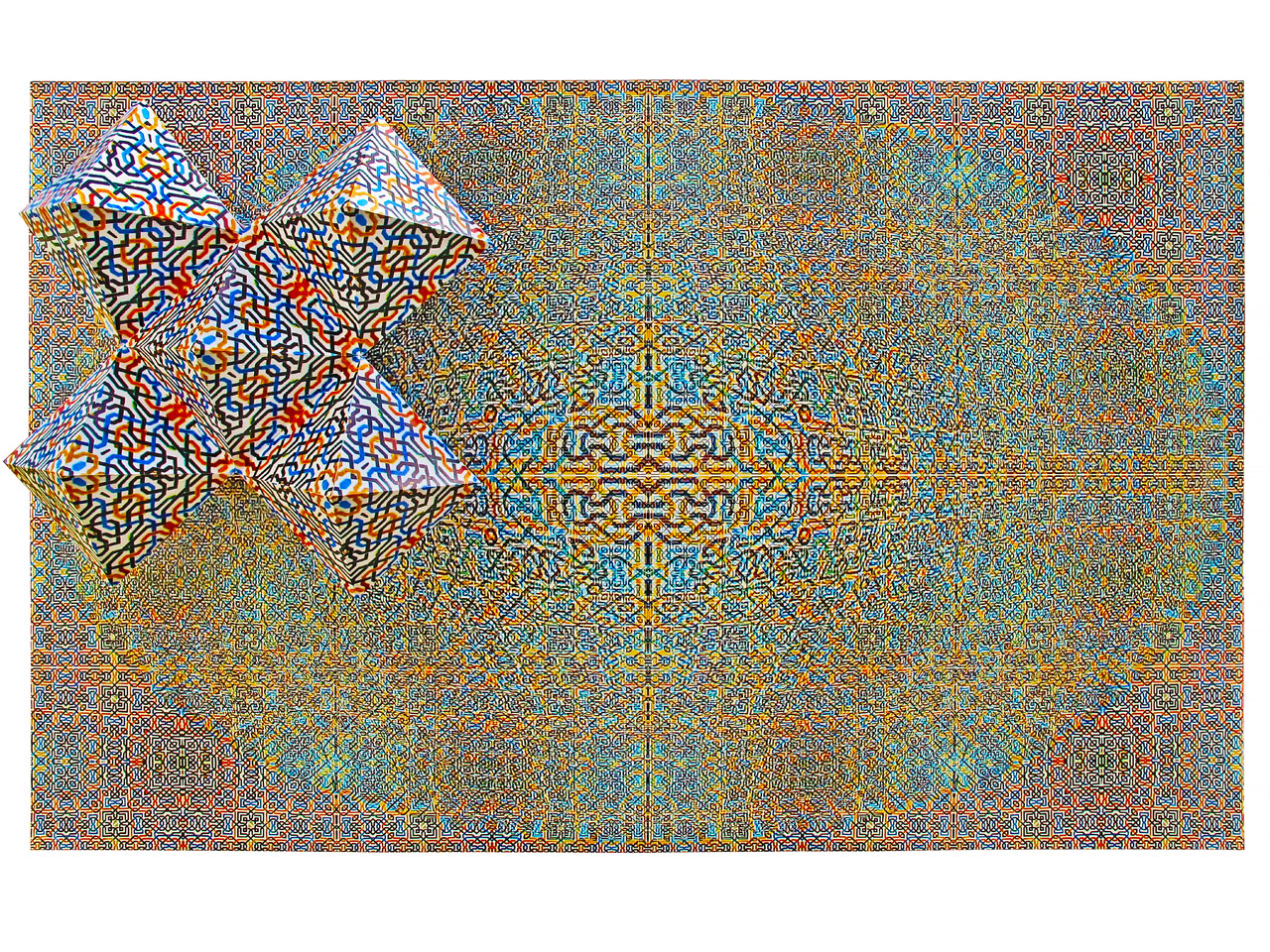 (1) Artist, lecturer, author, and professor of architecture in England, Keith Critchlow is especially known for books as „Islamic Patterns: An Analytical and Cosmological Approach” or „Islamic Art and Architecture: System of Geometric Design”.

Marcus Peter Francis du Sautoy, Simonyi Professor for the Public Understanding of Science and a Professor of Mathematics at the University of Oxford, is known for his work popularising mathematics. He has also written numerous academic articles and books on mathematics, the most recent being The Num8er My5teries. He is also on the advisory board of Mangahigh.com – an online maths game website. One of his famous quotes goes that „actually a code is a language for translating one thing into another. And mathematics is the language of science. My big thesis is that although the world looks messy and chaotic, if you translate it into the world of numbers and shapes, patterns emerge and you start to understand why things are the way they are.” 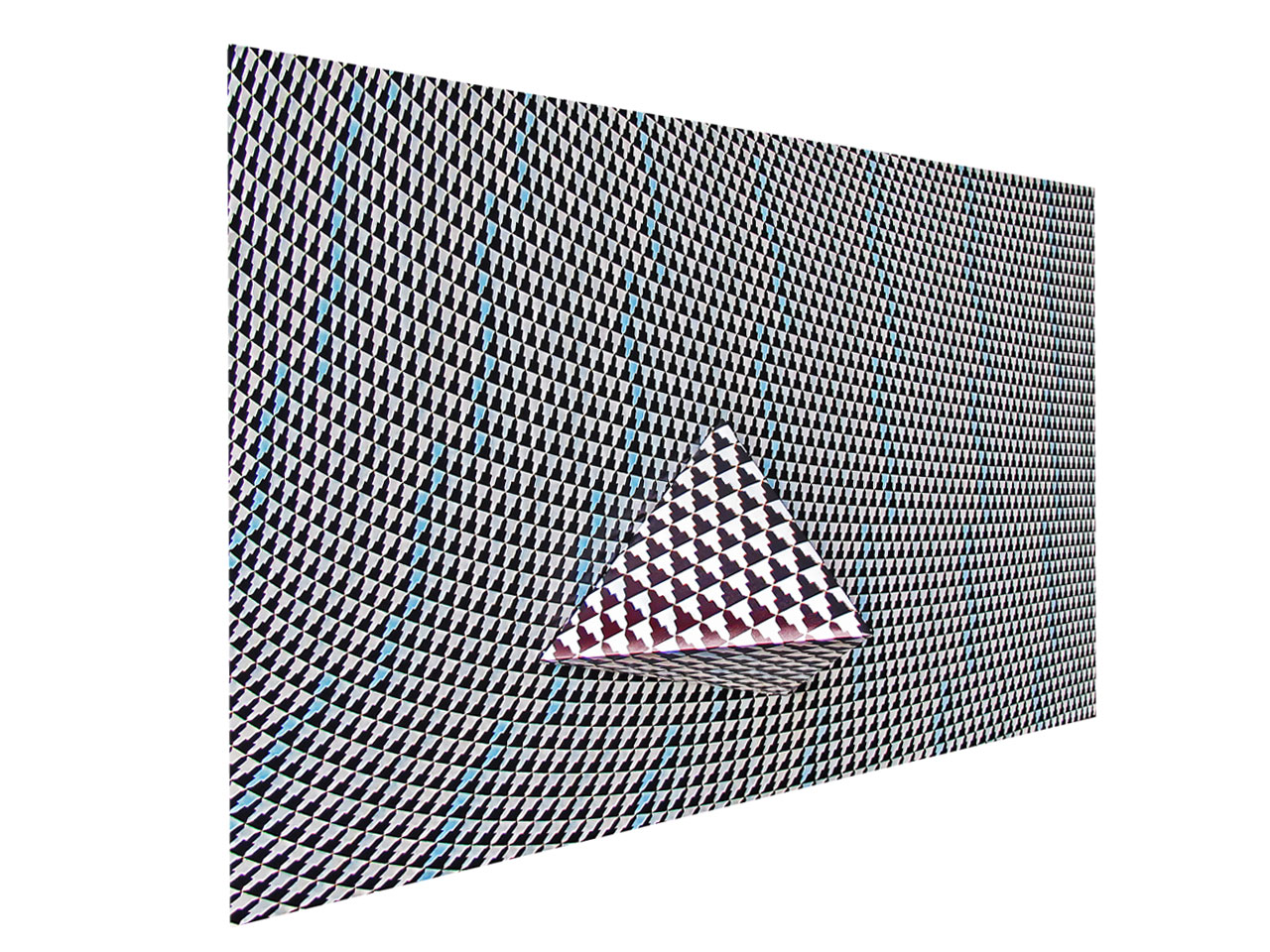