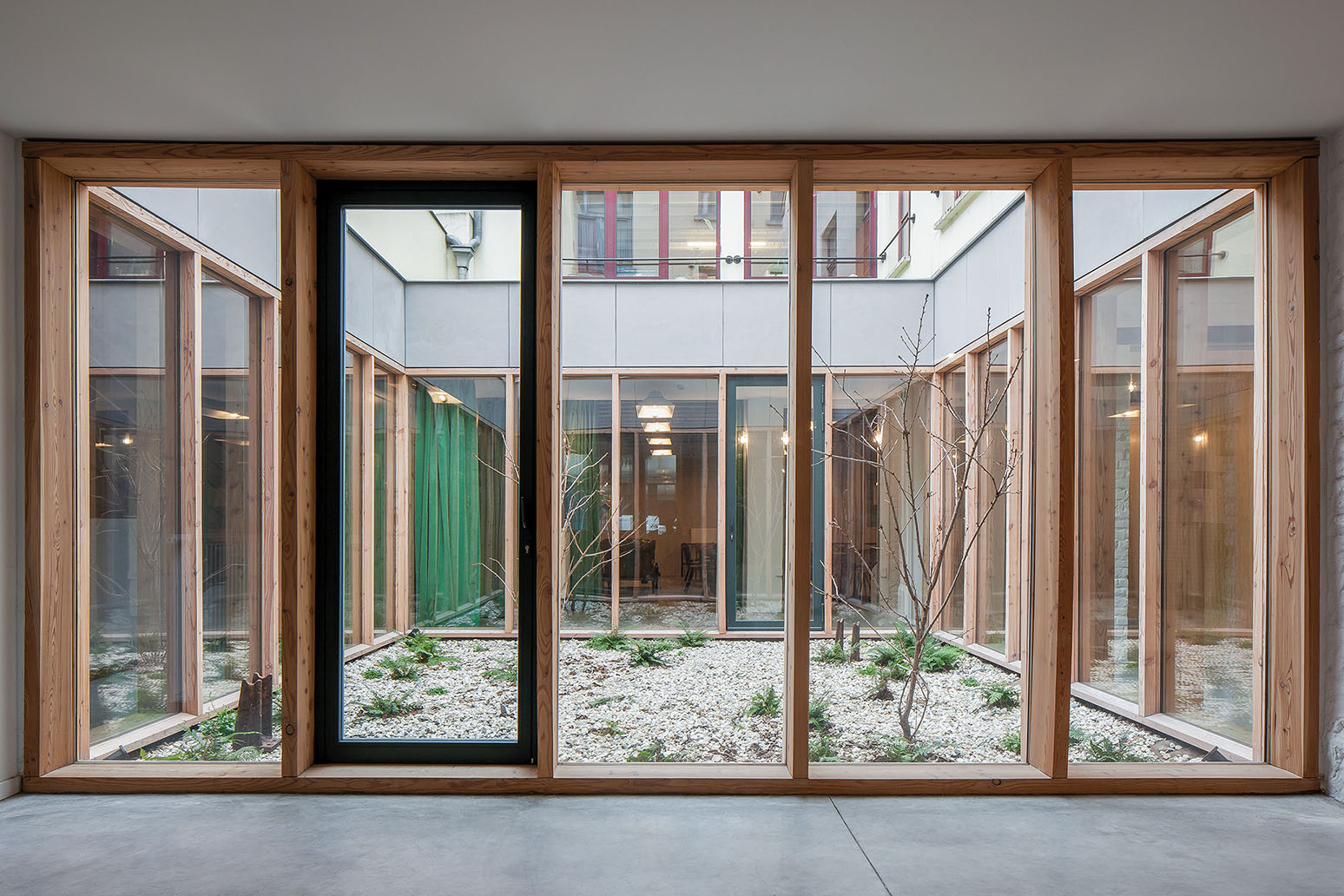 A Reopened Patio at the Rideau Theater

“Nowadays, people don’t go to the theater to participate in a “sacred act”, but come at any time of the day, for a multitude of activities. The cultural places are to become a natural extension of the houses of their audience” – Olivier Bastin, architect, president of Rideau.

Located in Brussels, in a lively, energetic neighborhood, Rideau Theater launched an architecture competition for the transformation and reorganization of the entire site on Goffart Street, in order for them to host their activities in harmony with the surrounding residents. 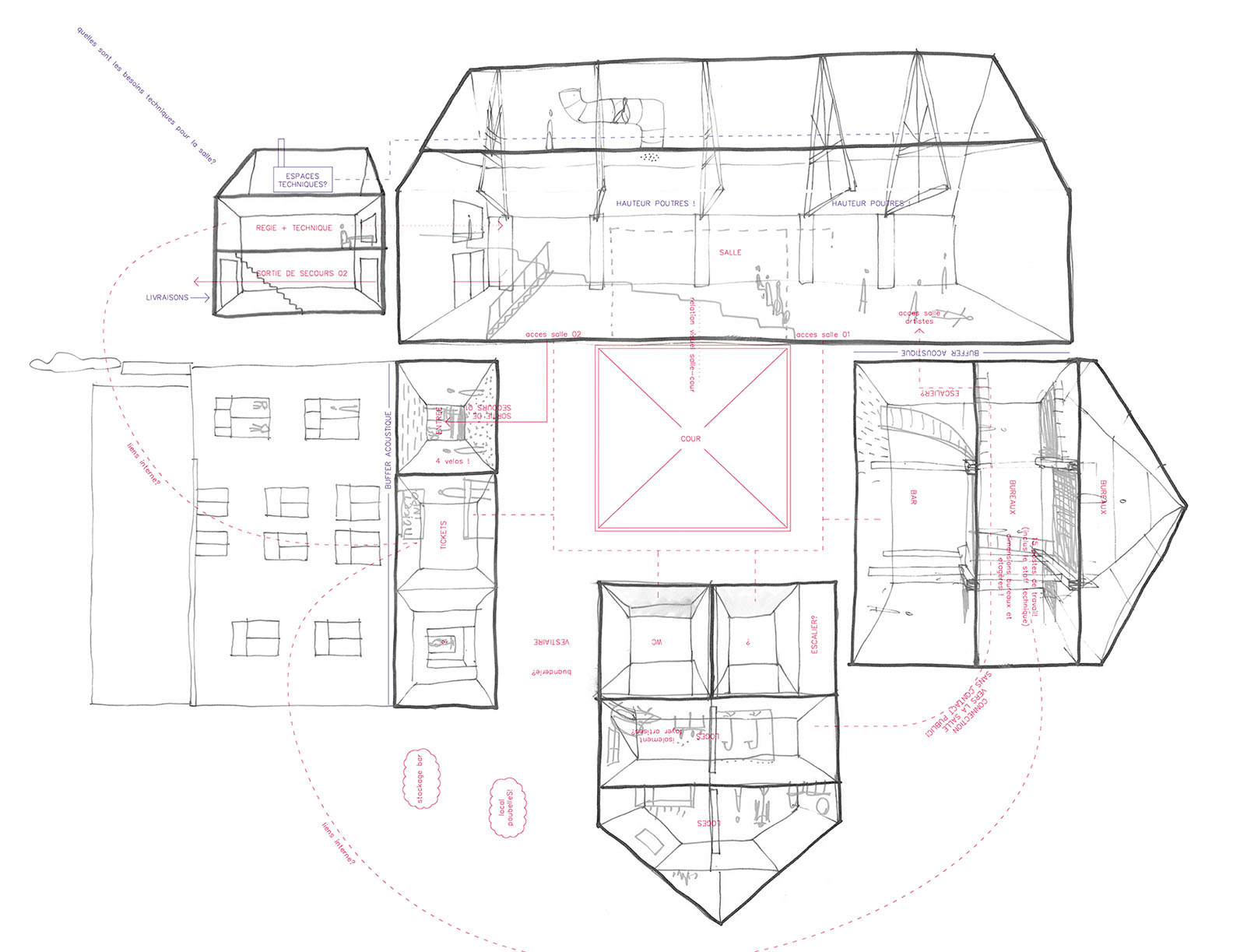 The existing ensemble, located behind a series of houses and apartments, contains five very different buildings. The largest was once a coal storehouse, but the spatial particularity of the existing buildings is the way in which they are organized around an inner courtyard. For OUEST, this feature became the organizing concept for the new theater – a patio. 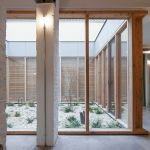 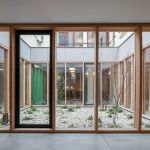 We learned from architects Stephane Damsin and Jan Haerens, the authors of the project, that, while working on this project, they called the theater Belle de Jour during the day and Oiseau de Nuit during the night. Surely, the best way to anticipate problems in a project is for the architectural design team, assisted by specialists, to go through all the possible scenarios of use and interaction with the imagined and created space. Thus, the Rideau Theater by day is a working space, behaving as a bright and comfortable instrument for the artists, staff and technicians, while at night it becomes an elegant, mysterious theater house, even for the audience attending the shows. At the same time, the public enjoys the experience of discovering the almost secret place of a somewhat hidden theater, hidden behind the houses on the street.

The key piece of the project is a patio, introduced in the existing interior courtyard. This new object, a precise geometric figure consisting of four identical façades, contrasts with the existing heterogeneous buildings.

“The patio, or open terrace, organizes all the programs around it (ticket office, bar, theater room, facilities …) and brings order and functionality to the project” – OUEST.

The natural light that enters through the patio floods the entire space of the theater and even enters the show room. The light unifies the spaces. Four rectangular bays with wooden frames constitute the sides of the patio. On the ground, white gravel, two shrubberies and some small plants accentuate the calm of this space that opens to the sky, the heart of the project. 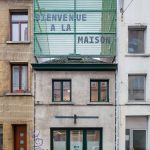 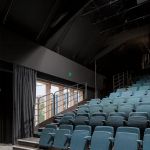 Elegant, yet unpretentious finishes accompany the spectators. Floors with polished concrete screeds and epoxy resins in shades of light grey, wood-clad parietals or simple plastered brickwork and smooth white ceilings complete the atmosphere with dignity and good measure. The show room has stepped seating, and the cyan green curtains are the same color as the seats. The bar has, in its turn, an elegant Chinese green accent, and the three levels above its countertop bring dramatic daylight into its space.

Towards the street, the theater is announced and brought into the city by a metal panel. A green mesh, on which changeable fragments of texts that refer to the currently performed plays are displayed, communicates its presence. The ambiguous expression of the theater in the landscape of the street, without a recognizable façade but with a diffuse image, spread throughout the street, justifies the question: where does the theater start and where does it end? To which the architects of OUEST openly responded: Who knows…? This is why, at the Rideau Theater, we have a reopened patio.